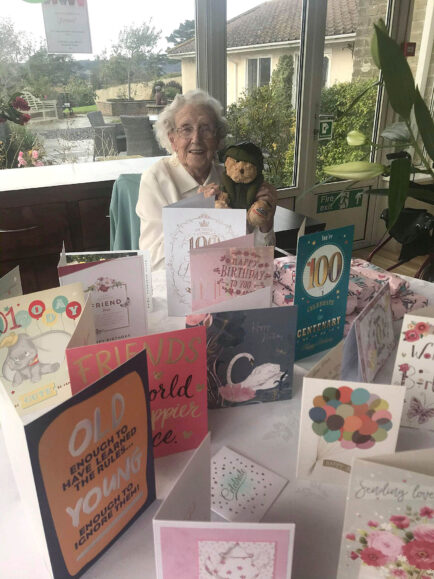 Joan – who has two children, five grandchildren and five great grandchildren – was born on October 23 1919 in Huddersfield, Yorkshire. She went to Greenhead High School after passing her 11 plus exam when she was only 10 years old.

Leaving school in 1936, Joan joined a fever hospital when she was 17 as she was not yet old enough to go into general nursing. She passed her final fever exams at 20 but was not allowed her certificate until she was 21. She then became a state registered nurse at 23 after completing her training.

During the war, in 1943, Joan joined the Princess Mary’s Royal Air Force Nursing Service at RAF Halton and reached the rank of Flying Officer. She was later posted to the RAF Hospital at Wroughton, Swindon, which was a casualty clearing station for D-Day and was among the sisters to march past the King in the first Battle of Britain Parade.

She commented: “We used to take in casualties every other night so we could deal with things that needed doing, then they would be passed on to a hospital , probably nearer to their hometown. It was sad in a way because they were the youth of our generation. It was such a waste.”

After the war ended, Joan got a job as an industrial nurse at hat manufacturers Christy and Co, where she met her husband John. He was the buyer, had gone to war and returned to the job he had had since he was 14 and worked his way up from office boy to head buyer.

She spent a year and a half at the factory before the NHS came in so they no longer needed a trained nurse, but Joan said she didn’t mind as she was then married.

They married in January 1948 and had their first child, Jaqueline, in April 1949, followed by a son, Michael, in January 1952, but Joan carried on nursing as they grew up.

In the 1960s, Joan and John gained a reputation for organising caravan rallies all over Europe and in 1996 they moved to Lyme Regis where Joan joined the WI.

It was mainly due to her being branch secretary that Joan decided to get a computer instead of using a typewriter and she has become a bit of a tech-whiz for her age, regularly joining in local debates on Facebook.

When asked about her longevity, Joan said: “I had a good start in childhood and when I was training, we always had good meals and I looked after myself. If I had anything wrong , I wouldn’t wait until it got me, I went straight away to the doctor.

Joan celebrated her birthday with a lunch at Fairfield House with her son Michael and daughter-in-law, who travelled down from Rugby to spend the afternoon with her.

She is pictured above with her birthday cards and a ‘pilot’ teddy bear she was presented by the Bridport and Lyme Regis members of the Royal Air Forces Association (RAFA).

Joan named the bear Rupert after a Squadron Leader she first met at the Aircrew Receiving Centre RAF Abbey Lodge in London. He had escaped after being shot down over France and their paths crossed again when she was posted to the RAF Hospital in Gutersloh, Germany, after the war and he was the Town Major in 1946.

YOUTH members of Lyme Regis Football Club were given the opportunity of a lifetime when they played at the FA’s national football centre. […]

Council denies allegations made by seafront trader in tax dispute

LYME Regis Town Council is embroiled in a row over tax with former town and district councillor George Symonds. […]