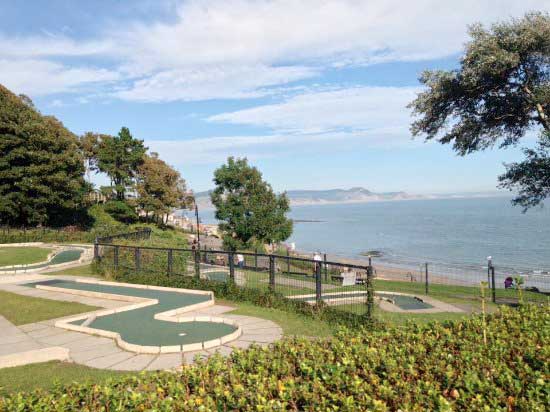 LYME Regis Town Council has agreed how it intends to “reopen the town” following the coronavirus lockdown, with many amenities set to open this weekend.

Pay parks, mini golf and the Monmouth Beach chalet and caravan park were among the facilities to be given the green light to open this month by councillors, who met via video conferencing app Zoom this week.

But decisions also included keeping the park and ride closed for the remainder of the year and events such as concerts will not go ahead in the Marine Parade shelters.

Despite its current financial concerns, the council also agreed a £100 discount for holiday accommodation parking permits, used by visitors to holiday lets, bed and breakfasts and guest houses, and a 20% discount on annual rent charged for chalets and caravans at Monmouth Beach.

Town clerk John Wright reported that the council had received more than 50 complaints from owners from chalets and caravans at Monmouth Beach, after it was agreed to charge them a full year’s rent despite the site being closed for overnight stays since April.

He said some of these complaints had come from those who were “historically supportive of the council” and many had suggested a 25% discount.

Mr Wright advised that if the council agreed to a discount, it should not apply to those who already owed back payments to the council.

In previously agreeing to charge 100% rent, the council gave owners up until June 2021 to pay, but if a discount was to be offered, Mr Wright said the payment should instead be made by the end of the financial year in March 2021.

The Mayor of Lyme Regis, Councillor Brian Larcombe, said he had sympathy with chalet and caravans owners, and if a discount was offered he hoped they would return the gesture by paying quickly.

However, Councillor Ellis said the decision to close the Monmouth Beach site was not down to the council but to government restrictions on overnight stays and visiting second homes.

Councillor Graham Turner pointed out that some chalets were used as holiday lets and owners had already received a £10,000 grant from the government for loss of income.

Councillor Rob Smith was also concerned that giving a discount would set a precedent if there was a second wave of coronavirus or any other reason to close the park.

However, it was eventually agreed to offer a 20% discount, with the chalet and caravan park reopening for overnight stays this weekend.

Other amenities to reopen from Saturday, July 4 will include Anning Road and Henry’s Way play parks. The mini golf and table tennis in Lister Gardens were due to open from July 13 but this has now been delayed.

Alfresco eating areas on town council land will be allowed to operate, coinciding with the reopening of many pubs and restaurants.

Watersports concessions such as the kayak hire can now operate and the hair braiding stall usually found on the Cart Road will operate from the Marine Parade shelters.

Concessions for the trampolines and deckchair hire will not open at this time. The United Beach Mission group, which runs children’s games and activities on the beach, will not be coming to Lyme Regis this year.

The beach showers will not be installed this year due to the high frequency touch points.

Beach huts can also reopen on the condition that the Cart Road is kept clear and beach hut-users should set up chairs, etc. on the pebble beach opposite and not directly outside their huts.

The town council has now agreed to reopen the Candles on the Cobb Pavilion toilets in the Anning Road playing field from Saturday, July 4 and Dorset Council will open the remaining toilets in the town – including Broad Street, Charmouth Road and Holmbush car parks, and outside the Cobb Arms on Marine Parade – from Tuesday, July 7.

The park and ride service in Charmouth Road will remain closed for the rest of the year, as councillors felt this was not financially viable due to social distancing restrictions on the buses.

Members were told that the service could cost “tens of thousands” if it were to operate, and they felt this was not prudent considering the council’s current financial situation.

All car parks in Lyme Regis are now open.

Dorset Council has now announced that free parking in council-run car parks will no longer be available for key workers.

The Cart Road in Lyme Regis has been closed to traffic to allow for more social distancing space, meaning blue badge holders can no longer park on the seafront, but four additional disabled parking bays have been created in Cobb Gate car park.

Drivers are encouraged to pay by card in car parks wherever possible.

Commenting on the parking permits at the virtual council meeting, holiday let owner David Boggan said it was unfair for the council to charge to full amount of £670 for the year when the car parks had been closed for two months. He suggested a fair price would be £502.

Councillor Cheryl Reynolds said she thought this suggestion was fair, adding that people couldn’t be expected to pay for parking when there was nowhere to park.

Councillor Michaela Ellis said that holiday accommodation owners were already getting a large discount by purchasing a permit, as it would cost about £2,600 to pay for a similar period via the meter.

She added that, despite being closed to the general public, Woodmead Halls car park had remained open to permit holders throughout the lockdown.

It was agreed to charge £570 for the remainder of the year.

All major events and festivals scheduled for the summer months, including Lifeboat Week and Regatta & Carnival Week, have now been cancelled.

The market area of the Marine Parade shelters as already been reopened and bookings are now being taken for stalls, etc.

However, bigger events such as the weekly town band concerts usually held on the seafront through summer will not go ahead as the council does not want to encourage crowds to congregate.

For the latest list of Lyme Regis businesses now open or reopening in the coming days, visit our Shop Local page.

The council is also preparing to reopen its offices at Guildhall Cottage to the public. It had aimed to open on July 13 but this has now bee delayed at Perspex screens have not yet arrived.

Only some staff will return to the office, with the rest continuing to work from home, and safety precautions will include a queueing and doorbell system outside, Perspex screens over desks and hand sanitisers on entrances.

In line with government guidelines, weddings for up to 30 people will be permitted in the Guildhall and restrictions on numbers at burials in the cemetery remain in place.

THE Nag’s Head in Lyme Regis will soon be reopening under new ownership.  […]

THE annual bonfire and fireworks display in Lyme Regis has been cancelled due to the coronavirus pandemic.  […]