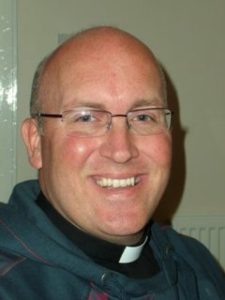 THE Golden Cap Team of Churches has appointed a new rector to replace the Reverend Stephen Skinner, who retired this time last year.

The Reverend Chris Martin (pictured) has been appointed and is expected to take up the post in the New Year, overseeing the 13 churches of the Golden Cap team in West Dorset and East Devon, including St Michael’s Parish Church in Lyme Regis.

His appointment was made by the Bishop of Sherborne, on behalf of the Bishop of Salisbury. It follows the departure of the Reverends Stephen and Jane Skinner in November last year.

Jane was vicar at St Michael’s Parish Church before moving to a new benefice in North Devon, where her husband Stephen also retired as rector.

The new rector will now oversee the appointment of a vicar for St Michael’s and this process is expected to start imminently.

Originally from Wales, the Reverend Martin worked in financial services before being trained for ministry at Trinity College Bristol. He was ordained in 2009, serving his curacy in rural south Norfolk.

He is currently the vicar of the Churches 4All Mission Community, a group of rural parishes in East Devon within the Diocese of Exeter, which comprises the villages of Whimple, Talaton, Clyst Hydon and Clyst St Lawrence.

A spokesperson for the Golden Cap Team said: “We believe Chris to be the right fit for us here and in the deanery and we are looking forward to welcoming him, his wife Tina and their pet labrador Welly, sometime in the New Year, and to a licensing towards Lent.

“Archdeacon Penny wishes to thank all those who have been involved in the appointment process for their care, prayer and discernment.”

The news of the Reverend Martin’s appointment was met with a round of applause at both Charmouth and Lyme Regis churches.

About Francesca Evans 2237 Articles
Francesca grew up in Lyme Regis and has worked in community journalism in the area since 2011, having gained a First Class Honours degree in journalism and her NCTJ qualifications at Southampton Solent University.
Instagram Twitter

Police appeal for witnesses after ‘indecent act’ on beach

POLICE investigating a suspicious incident on Lyme Regis beach are appealing for witnesses or anyone with information to come forward. […]

“PERHAPS one thing the virus has shown us is what really matters, what the important things are.” […]