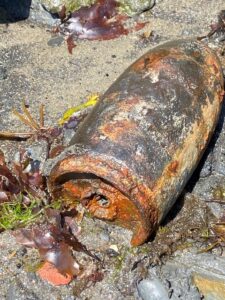 A BOMB disposal team were called to Lyme Regis yesterday (Monday) to deal with a “piece of military ordnance” found on the beach.

Coastguards were first called to the beach between Lyme Regis and Charmouth at about 2.15pm on Sunday, June 21 after a member of the public found the suspicious object.

Once located, it became clear to officers that this was not the usual old car part or similar often found on this part of the beach, which sits below the old town dump.

A 300m exclusion zone was immediately put in place whilst the bomb disposal team, also known as explosive ordnance disposal (EOD), were advised.

However, with the spring high tide still coming in, the object was soon submerged by the sea.

The area was then marked and the coastguard arranged to meet EOD officers at low tide on Monday to enable safe identification and disposal.

On Monday morning, having confirmed that the object had not been swept out to sea overnight, coastguards set up a cordon whilst awaiting the arrival of the EOD team from the Royal Logistic Corp in Tidworth.

On arrival, the EOD specialists identified the object as the nose cone of a WWII 8lb ‘practice bomb’. These were usually dropped by Lancaster bombers. The nose cone was deemed to be safe and was removed from the beach.

Lyme Regis Coastguard would like to thank the members of the public that made the initial report, adding that it was “better to be safe than sorry”.

AN Uplyme family is being left to pick up the bill of rebuilding their fire-stricken home after insurers refused to pay out. […]

THE Woodroffe School in Lyme Regis says it is following “all appropriate measures” after students returned from a ski trip in Italy this week, sparking some concerns about the spread of coronavirus. […]

RESIDENTS campaigning for a safe way to dispose of needles made an impassioned plea to councillors this week, asking them to accept and address drug problems in Lyme Regis. […]