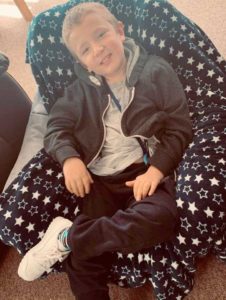 THREE siblings from Lyme Regis are planning to walk 100km over two days in the Peak District to raise funds for a charity close to their heart.

Mum of two Kelly Apps, her sister Julia Durrant and brother Dave Street, will be walking in honour of Kelly’s son Oliver (pictured), to raise funds for his seizure detection device and Epilepsy Research UK.

Oliver, aged 12, was born with a rare genetic mutation which causes severe epilepsy.

Kelly commented: “The STXBP1 mutation was discovered fairly recently and more and more children each day are diagnosed with it, some having been without diagnosis for many years.

“STXBP1 Encephalopathy is a gene mutation on the STXBP1 gene located on Chromosome 9. In those without the mutation, the gene ensures the release of neurotransmitters, import messenger substances, that regulate the exchange of information between nerve cells at synapses in the brain.

“A mutation in the gene causes the brain cells to no longer communicate properly with each other.

“One of the serious side affects for an ‘STXer’ is severe epilepsy, the type which is very often not completely solved by medication. “For a long time Oli was on a cocktail of medication, none of which seemed to stop him having daily seizures.

“Thanks to ongoing research, his epilepsy is currently pretty well regulated. However, the seizures come on so suddenly and often a night. Most premature death in Oli’s condition is by SUDEP (Sudden Unexpected Death in Epilepsy) where the body, the heart, the mind and everything else just shuts down.

“His last neurology appointment involved a heartbreaking conversation about the chances of SUDEP in Oli’s condition. SUDEP often happens at night and Oli’s seizures are often in the night.

“The STX community have lost too many children to epilepsy so far and other families facing similar journeys due to a whole host of other conditions endure the same fears and heartache.

“All parents worry about their children. We have all checked their heartbeats a million times each night and done the breath test, right? Every morning I walk into Oli’s room with absolute dread and I want to be assured I am doing all I can to prevent the worst.

“The reason for my fundraising is to assist the ongoing need for research into Epilepsy and also to pay for a top of the range seizure detector for Oli so that we might save his life.

“Oli is a superstar. He is very important to us, to his wider family and especially to his younger sister Madi who dotes on him and is constantly worried about his seizures.

“He brings happiness to all who know him, is funny, engaging, a little bit naughty and an all round charmer. Oli is loved by all. Oli knows love and he knows and enjoys life.

“Please help us help Oli and millions of others like him battling epilepsy.”

Kelly, Julia and Dave will be taking on their Peak District challenge on Saturday, July 9 and will be holding a fundraising bingo night tonight (Friday), with eyes down at 8pm in the Woodmead Halls.

You can also make a donation online at www.justgiving.com/crowdfunding/kelly-apps-3

YOUTH music charity B Sharp paid tribute to its founder Fran Williams, who will stand down this month, at its recent annual general meeting. […]