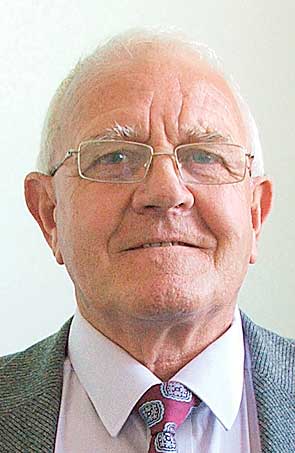 A LYME Regis councillor has expressed his “bitter” disappointment that he is not standing in today’s local elections because of an issue with his nomination forms.

Veteran councillor Owen Lovell’s name will be missing from ballot papers today (Thursday), bringing an end to his 40-year career in local government at town and district level.

Councillor Lovell (pictured left), a former Mayor of Lyme Regis, had intended to seek re-election to the town council and had submitted his nomination forms early because he was going abroad for four months over the election period.

Explaining his situation at the final meeting of the current town council last night, he said he had sought advice from West Dorset District Council and had been told to download forms from the Electoral Commission’s website and submit them early.

However, because the forms were signed and dated in January, he was later told this was “too early” to submit them and his nomination was not accepted.

Councillor Lovell said there was no reference to a date restriction on the forms, and he has put the situation down to the “incompetence of electoral services” at West Dorset District Council, which has now become part of the new Dorset Council.

He added that “to rub salt in the wounds”, some candidates had missed crucial information off their election statements posted around the town – including their own addresses and details of the printer, as required by law – and the monitoring officer had been “lenient” with them and allowed them to correct this by taking an advert in the local press (see Public Notices).

“If that could apply to them, why couldn’t it apply to me?” he asked.

“I’ve not served 40 years and learnt nothing, I’ve learnt a fair bit. But I do get annoyed when the legalities are being applied to me heavy handed and other people are being allowed to do it another way. I do find that somewhat churlish.

“It’s not the West Dorset District Council that I served for 20 years, where the officers were all efficient and if you asked them a question you got the correct answer.

“I feel quite bitter about this because I didn’t actually want to finish. I’m going reluctantly but it should have been my choice whether I stood again for this council, not somebody else’s, especially as I filled out all the forms right except for one date, which the electoral officer took umbrage with.”

He added: “I have enjoyed my 40 years and I wish you all good luck in the future with the new council.”

Speaking later in the meeting, Councillor Lovell offered advice on the recent issues over councillors’ behaviour towards one another. He said that future members of the council should learn to “walk away and not get personal”.

He added that he was “fed up of being tarnished with the same brush” and if members had an issue with other councillors, they should not be afraid to name them.

Cherry trees to be planted for VE Day commemorations

A ROW of ornamental cherry trees will be planted in the Anning Road playing field in Lyme Regis, as part of commemorations marking the 75th anniversary of Victory in Europe (VE) Day. […]

THE Mayor of Lyme Regis has described the relationship between the town council and new Dorset Council as “broken”, in light of an ongoing dispute over land at Monmouth Beach. […]