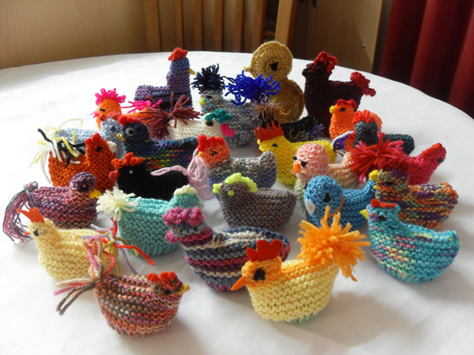 CHILDREN at St Michael’s Primary School in Lyme Regis have received hand-knitted Easter gifts from members of the local University of the Third Age (U3A).

Before the coronavirus pandemic, a dedicated group of U3A knitters approached the school and created a knitting club for the children.

Each week pupils, alongside their adopted knitter, learnt the basics of casting on, knitting and counting stitches. The initiative was a great success, bringing together different generations of the community with a shared interest.

However, due to partial school closures during the pandemic, this club was put on pause in March 2020.

During the autumn of 2021, the U3A approached the school again, asking if they could undertake a project which would result in every child receiving a personal gift to let them know they were thinking of their budding knitters.

The group, made up of 27 knitters and led by Rachael Pope, knitted away until finally they had created 123 chickens, each designed to sit on an egg – in this case a chocolate Cream Egg for Easter.

Each child and adult at St Michael’s received a chicken with its egg.

When handing over the brood, Rachael said: “This is passing down something special in these difficult times from one generation to another.”

The school would like to pass on its thanks to all 27 knitters and the Lyme Regis U3A organisation who kindly provided the wool, the eggs and most of all their time in supporting the children.

A HUGE number of both entrants and spectators celebrated Easter at the annual bonnet parade in Lyme Regis today (Sunday). […]

THE headteacher of the Woodroffe School in Lyme Regis has emphasised the importance of pupils’ continued engagement with online learning and has praised staff for their efforts during the latest lockdown.  […]

THE new headteacher at the Woodroffe School in Lyme Regis is coming to the end of a successful first half term. […]

Brian Larcombe is set to serve as mayor for a third term with Kelsey Ellis to become the town's youngest ever deputy mayor #lymeonline #lymeregis #dorset https://t.co/nB0kmDZIr2
View on Twitter
0
1