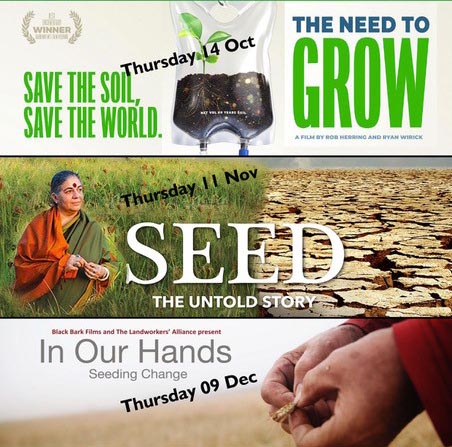 ENVIRONMENTAL group Turn Lyme Green is restarting its curated collection of film screenings again, with a season all about protecting our soil and seeds.

Three films have been selected by new film curator Suzy Gallina and will take place on the second Thursday of the next three months, starting this week at The Driftwood Café at Lyme Regis Baptist Church on Silver Street.

Doors will open at 7pm for 7.30pm screenings and refreshments will be available. Entry is free but donations would be welcome.

The three films explore seeds and soil: those trying to reintroduce ways of growing in the UK against the backdrop of Brexit, those fighting the damage done to seed stocks and its terrifying consequences and those using technology to localise food systems and regenerate our depleted earth.

“These films will certainly seed ideas and show how hard people everywhere are trying to do the very best for our planet and that change is urgently required,” said curator Suzy.

The screenings will be as follows:

Thursday, October 14 – ‘The Need to Grow – Save the Soil, Save the Word’
The Need To Grow follows pioneers of cutting-edge technology as they fight to localise sustainable food systems and regenerate Earth’s dying soils.

Thursday, November 11 – ‘SEED – The Untold Story’
Ninety-four per cent of our seed diversity has disappeared. As many irreplaceable seeds near extinction, ‘SEED’ reveals the harrowing and heartening story of passionate seed keepers as they wage a David and Goliath battle against chemical seed companies, defending a 12,000-year food legacy.

Thursday, December 9 – ‘In Our Hands – Seeding Change’
At the heart of all change lies a story, and ‘In Our Hands’ is a film about a new kind of farm, a new kind of food and a new kind of society The inspiring story behind the blood, sweat and tears of the British farmers seizing the Brexit moment to outgrow the industrial food system.

LYME Regis residents and visitors had the opportunity to meet town councillors and members of the new One Planet Working Group during Regatta & Carnival Week. […]

THE chairman of environmental group Turn Lyme Green has released her annual report, hoping for “stability, resilience, support and peace in a world of turbulence”. […]

BOYLOS Watersports on Lyme Regis seafront is the latest local business to receive a Plastic Free Champions Award from charity Surfers Against Sewage.  […]