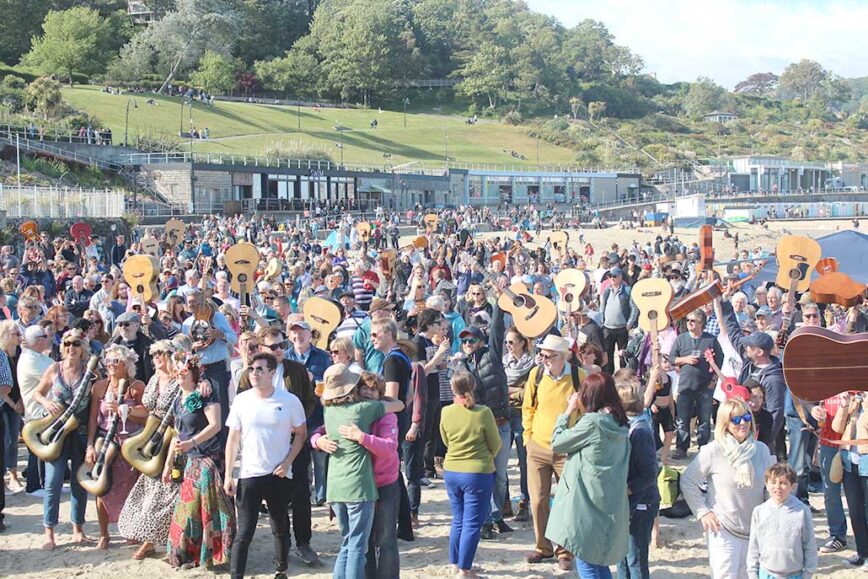 DESPITE poor weather forecasts, the sun came out just in time for crowds to enjoy the seventh annual Guitars On The Beach.

Held on Lyme Regis beach on Saturday, organisers this year dropped their annual attempt to break the record for the UK’s biggest band, instead choosing to focus on a more serious message – fighting climate change.

Founded by local journalist and PR expert Geoff Baker, Guitars On The Beach set the record for the UK’s biggest band when it was first held in 2013, when 2,276 guitarists came together to perform Buddy Holly’s ‘Rave On’.

The following year it broke its own record when an estimated 3,000 played along to ‘Smoke On The Water’ with Deep Purple frontman Ian Gillan.

This year, guitarists of all ages and abilities were still encouraged to play along with the Guitars On The Beach house band, but organisers focussed more on encouraging the audience to consider their impact on the environment and promoted local eco-initiatives including Turn Lyme Green and Plastic Free Lyme Regis.

The audience grew throughout the day, enjoying a festival vibe with a full programme showing off some of Lyme’s best musical talent.

The house band performed a set of ‘play-along’ songs, including Cliff Richard’s ‘On The Beach’ and the original Guitars On The Beach anthem ‘Rave On’, before popular local band DeltaTango7 closed with their headline set.

For more pictures from Guitars On The Beach 2019, visit the LymeOnline Photo Gallery

A JAZZ evening will be held at Uplyme Church on Saturday, June 1 to raise funds for the village’s Community Sponsorship Scheme, which aims to resettle a Syrian refugee family in the local area. […]

THE new eat:Lyme Regis festival became the first major event to be staged in the town for over a year today (Saturday).  […]