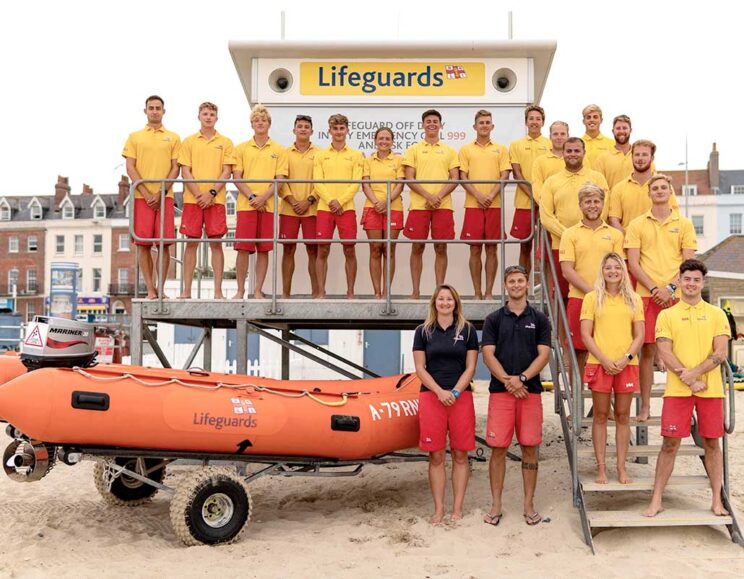 WITH the school summer holidays now in full swing, and many families choosing to staycation in the South West, the RNLI and HM Coastguard are urging every parent to be aware of the potential dangers when visiting the coast.

The importance of keeping an eye on your family was highlighted this week as lifeguards in Devon and Dorset carried out likely lifesaving rescues of young people who were struggling to stay above water.

It was likely a life was saved yesterday at West Bay this week when RNLI lifeguard Jamie Hannaford, 19, heard a mother shouting and ran into the water fully clothed to pull her young daughter out of the water and bring her to shore.

Another likely lifesaving rescue took place in Sandy Bay near Exmouth on Monday when RNLI lifeguard Jake Butt rescued a girl who had been washed off the rock reef into the sea and was struggling to stay above water, after her sister alerted the lifeguards to the situation.

On Croyde beach in north Devon, lifeguards performed around 20 rip current rescues. Meanwhile, down at Fistral beach in Newquay, there were 19 rescues and 11 assists, all in rip-related incidents.

On Tuesday at Holywell Bay in Cornwall a ‘flash’ rip current occurred suddenly just outside of the red and yellow flags where two young boys were struggling on body boards and shouting for help.

If you or your family are going swimming at the beach, the RNLI always recommends visiting a lifeguarded beach, such as Lyme Regis, and staying between the red and yellow flagged area – which is most closely monitored by lifeguards.

Last year, RNLI lifeguards dealt with more than 1,500 incidents involving rip currents, saving the lives of 95 people caught in them.

Steve Instance, RNLI Water Safety Lead for the South West, said: “Our coastline is a fantastic place to spend time together as a family but there are also plenty of potential dangers, especially for those who aren’t fully aware of their surroundings.

‘The main one is rip currents which cause most incidents in the water that RNLI lifeguards deal within the UK.

“We are seeing a spike in incidents this summer involving these potentially deadly currents, which move even faster than an Olympic swimmer and can quickly drag people into deep water a long way from the shore.

“It’s important that anybody venturing in or near the sea knows, not just what rip currents are, but how to react if they are caught in one or see someone else in trouble.

“They are difficult to spot and even the most experienced and strongest swimmers can find themselves caught out so it’s important where possible to use beaches that have lifeguards patrolling on them.”

The sheer strength of rip currents was shown at Bantham beach in South Devon last Saturday when lifeguards rescued a learner surfer who was caught in the fixed rip current on the left hand side of the beach and couldn’t get back to shore.

RNLI lifeguard Lewis Horne paddled out to the casualty on a rescue board, but when bringing them back to shore they were only making little headway, so senior lifeguard Alex Tucker launched the inshore rescue boat to collect the casualty.

If you find yourself caught in a rip current, try to remember the following key safety advice:

A flash rip current is a temporary rip caused by heavy surf with long wave periods, a rapid rise in sea level, or a storm.

Due to the high number of bathers in the water, it was difficult to get through the crowds on the inshore rescue boat so RNLI lifeguard Jago Griffith paddled out to assist the boat and together they rescued the young boys.

Jago and Ivan had just returned to shore when they suddenly spotted two more bathers drifting out to sea in the same rip current. They were both rescued on rescue boards and safely returned to shore.

While rip currents are not the only danger at the coast with tidal cut-offs and inflatables also the cause of many emergency calls, they make up the majority of incidents in the water for RNLI lifeguards and are a major cause of accidental drowning across the world.

The RNLI and HM Coastguard strongly advise against taking inflatables to the beach and urge people to be aware of the tide times and local hazards to avoid getting into trouble.

Director of HM Coastguard Claire Hughes said: “We’ve seen so many times how easy it is to get caught out by the sea. That is why it is important to swim or bodyboard on lifeguarded beaches, stay within your depth, swim parallel to the shore and keep a close eye on friends and family at the beach and in the water.

“Make sure you are always contactable at the coast by carrying a fully-charged mobile phone and if you get into trouble or see someone else in trouble, call 999 and ask for the coastguard.”

TWO anglers were rescued by Lyme Regis lifeboat crew on Saturday night after they accidentally ran their boat ashore on Chesil Beach. […]

TWO teenagers and a 22-year-old man were arrested following an incident at Monmouth Beach car park in Lyme Regis, during which a police officer was assaulted.  […]