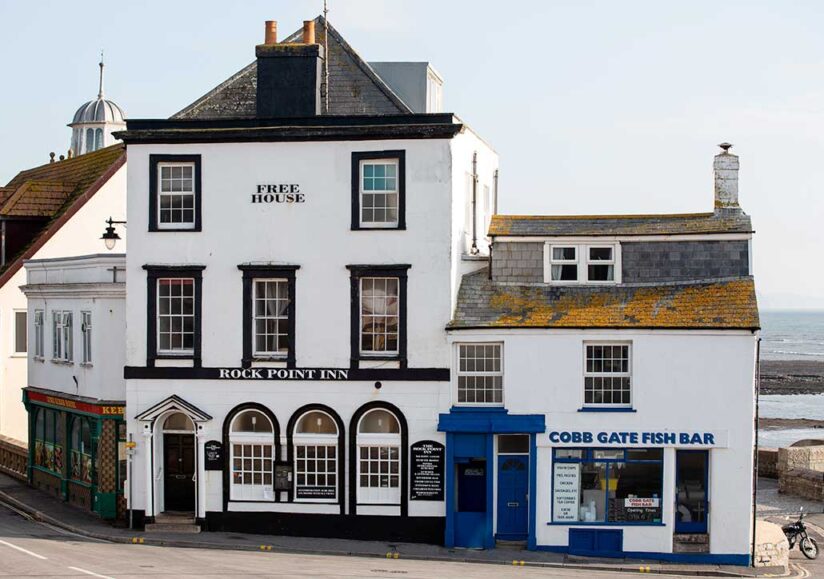 SOUTH West brewing and pub company St Austell Brewery has confirmed its first acquisition in Dorset in the form of the iconic Rock Point Inn at Lyme Regis.

As predicted earlier this month by the LymeOnline newspaper, St Austell Brewery has now confirmed it has purchased the historic town centre pub and adjoining fish and chip shop for an undisclosed sum.

The premises have been under the ownership of Gail Caddy since 1984 and will now become part of the successful and award-winning St Austell Brewery estate of West Country pubs, inns and hotels.

St Austell Brewery was advised on the purchase by Torquay-based property agents, Bettesworths.

Speaking following completion of the deal, St Austell Brewery property director Adam Luck commented: “We’re grateful to both Bettesworths for their advice and also to Gail Caddy, the previous owner of the Rock Point, for helping to make the transfer of ownership such a smooth one and we wish Gail every success with her next ventures.”

Independent and family owned since 1851, St Austell Brewery’s acquisition of Bath Ales in 2016 was a strategic move, not only to build the Bath Ales beer brands and business, but also to be able to service its free trade customers across the eastern part of its operating area more sustainably.

Following completion of the purchase of the Rock Point, the premises will remain closed for a number of months to allow for a complete restoration and refurbishment project to give the historic building, part of which is Grade II listed, a new lease of life.

Originally built some time towards the end of the 18th entury, numbers 1 and 2 Broad Street have played an integral role in the Cobb Gate end of Lyme Regis for more than 200 years. Originally named Bank House, perhaps due to its proximity to the riverbank and mouth of the River Lim, the larger Georgian building has been home to a glass and china emporium, a fishmongers and wine and spirit merchants before assuming its better-known role as a hotel and guest house in the early 20th century.

Previously operating under the name of the Vaults lounge, the hotel was first referred to as the Rock Point in 1927 and, despite a name change to the Central Hotel in the 1940s and being requisitioned for war service during WWII, reverted afterwards to the name by which it has been known to locals for over 60 years.

As for the Cobb Gate Fish bar, the listed building itself is lucky to have survived, being exposed to the vicious lashings of the sea for decades before the development of the Cobb Gate sea defences, while the premises have been home to confectioners, boot & shoe makers, insurance agents and cafes.

Working closely with local agencies and British Listed Buildings, St Austell Brewery will undertake a full and sensitive restoration of the buildings and will also be working with researchers from the Lyme Regis Museum to form a more complete understanding of the exact age of the Rock Point and fish bar before once again reopening both sites for locals and visitors to enjoy.

Describing the plans for the historic site Adam added: “The Rock Point is such an amazing pub and a focal point of the local community. We will be talking and listening to everyone over the next few weeks to ensure we do what is right for the building taking into account its heritage and historic usage.

“We have a wealth of knowledge and experience in terms of both community and destination pubs and we want to be sure that the Rock Point will continue to play an important role for both locals and visitors alike when the work is complete.”

For more information about St Austell Brewery and the timeline for the Rock Point restoration, visit www.staustellbrewery.co.uk.