A PAIR of the country’s most uncommon river-dwelling bird species, the dipper, have made the River Lim in Lyme Regis their new home.

And after at least three successful nesting seasons, the pair have become a popular attractions with many people using the footpath along the river bank. 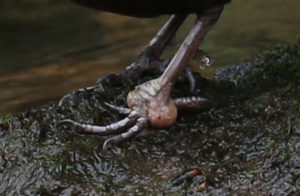 But this week people began to notice one of the birds carrying his leg and behaving rather clumsily as he foraged for food. Close-up photography (pictured left) reveals that the stricken bird has ‘bumblefoot’, or pododermatitis to use its technical name.

The disease more often involves tame parrots and budgerigars and the severity of the foot condition can vary, from a mild attack to the surface of the skin to a severe chronic infection that may involve bone infection and can lead to septicaemia and even death due to secondary infections.

The disease is treatable to captive bred birds if discovered early but to a wild bird the prognosis is not so positive.

The River Lim dipper’s foot has become disfigured forcing him to make a fuss of it by nibbling at his bulbous foot and holding it up from the water.

Lyme’s lone eider duck a familiar face at the Cobb

MYSTERY surrounds the four-year presence of a male eider duck who has set up home in Lyme Regis. […]

Lyme Regis was visited by an inquisitive dolphin in August, captured on film by Love Lyme Regis […]