TWO committee members of the Lyme Regis branch of the Royal British Legion have created a moving poppy display in the window of The Old Forge Fossil Shop, in Broad Street.

The owners of the shop have agreed for the the special display to stay in place until the end of September, meaning it will greet The Rifles when they exercise their Freedom of Lyme Regis by marching through the town on Saturday, September 22.

This display is one of many activities the Lyme Regis branch of the Royal British Legion is undertaking in support of Lyme Regis Town Council’s commemorations of the 100th anniversary of the end of the First World War.

This display comprises a central cross upon which several paintings have been incorporated to depict key events which took place during the Great War.

Surrounding the central cross are pebble stones decorated by committee member Ania Driver, each of which is inscribed with the name of one of the great battles of that conflict. 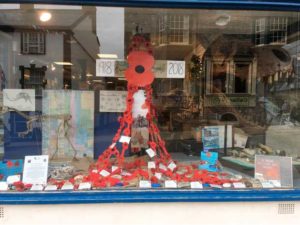 The knitted poppies were produced by members of the stitch and sew group of the Heritage Coast branch of the University of the Third Age, based in Lyme Regis. Particularly poignant are the poppies knitted by the late Irene Roper, who ensured they were completed and handed to Royal British Legion branch chairman, Ian Marshall, a few weeks before she recently passed away.

Mr Marshall said: “They are very special to us and will always feature as part of our future displays.”

Mr Marshall added: “We are indebted to the owners of the Old Forge Fossil Shop, Helen Matthews and Diane Reilly for supporting us in this venture and to Tracey Moody for assisting us in setting up the display.”

For more information on how the Royal British Legion is supporting Armed Forces service personal visit www.britishlegion.org.uk or contact Ian Marshall, chairman of Lyme Regis branch on 07584 993 955 or email to lymeregis.chairman@rbl.community

Ken to give last ‘Under Shady Tree’ talk

LYME Regis resident Ken Gollop will give what is billed to be his last ever ‘Tales From Under Shady Tree’ talk on Sunday, November 18. […]

Monmouth Beach graffiti splits opinion – what do you think?

GRAFFITI which has appeared on concrete blocks used to defend the coastline during the Second World War has split opinion in Lyme Regis. […]

“AN awful disease, originating in China, has swept across the world to England, seriously affecting the population. The people of Lyme Regis are in desperate need of flour and the recently restored Town Mill has risen to the challenge.” […]