THE Mary Anning Rocks campaign, which is currently running a £100,000 appeal to see a statue of the famous palaeontologist erected in her hometown of Lyme Regis, has unveiled an initial sketch of how the tribute will look.

With discussion having first been held in 2018 on the possibility of erecting a statue of the 19th century fossil hunter, the Mary Anning Rocks campaign finally launched its online appeal in November 2020, having already enlisted the likes of Sir David Attenborough and author Tracey Chevalier among its supporters. 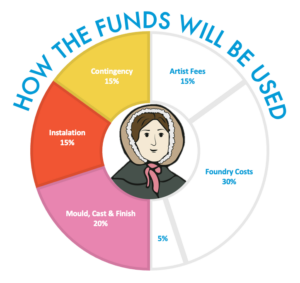 The campaign aims to raise £100,000 to complete the project and more than £52,000 has already been pledged. To get work underway, only a further £20,000 is needed to commission chosen artist Denise Dutton.

Denise’s sketch of the proposed statue shows Mary at the height of her fame, as a young woman walking out to the beaches to fossil hunt.

Mary is in her full working clothes carrying the accoutrements of her trade, basket, bonnet, hammer and is accompanied by her dog Tray. The platform she is walking on will also show some of her most famous finds craved into the base.

The site of the proposed statue has not yet been agreed, but suggestions have included near Cobb Gate or on the new Church Cliff Walk.

Mary was born in Lyme Regis in 1799 to a poor working class family and lived on the site where Lyme Regis Museum now stands.

During her lifetime she was not fully accepted in the scientific community because of her gender and class, but Mary is now known as one of the most influential women in the history of science, and her life will be the subject of the much-anticipated film ‘Ammonite’, starring Kate Winslet, due to be released this year.

To find out more about Mary Anning or to donate to the statue fund visit www.crowdfunder.co.uk/maryanningrocks

THE Mary Anning Rocks campaign has been given an extra 28 days to raise its £100,000 target for a statue of the famous fossil hunter in Lyme Regis.  […]

LYME Regis-based movie ‘Ammonite’ is one of many to have its release date delayed due to the coronavirus epidemic. […]

COASTGUARDS have warned the public to stay away from cliffs in the Charmouth area, following a large rock fall yesterday (Monday).  […]