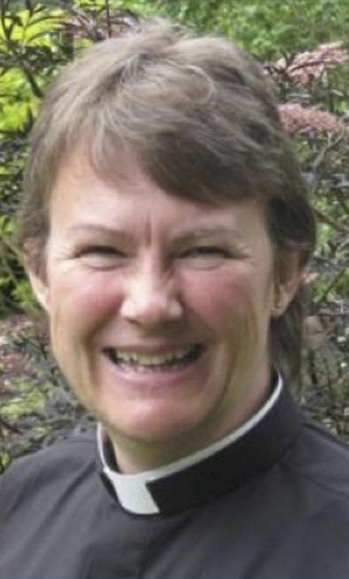 THE Reverend Sarah Godfrey, the new Team Vicar in the Golden Cap Benefice, who will be based in Lyme Regis, was welcomed by her new congregation at a special service in St Andrew’s Church, Charmouth.

The licensing was carried out by the Right Reverend Karen Gorham, Bishop of Sherborne.

She was welcomed to the benefice by a number of community leaders, including the Mayor of Lyme Regis, Councillor Brian Larcombe MBE.

The Reverend Godfrey grew up in the Chilterns where her father was a churchwarden.

She met her husband, Jonathan, in the early 1980s when they were both studying at Southampton University. They have two children, a son and daughter.

The Reverend Godfrey was ordained at Salisbury Cathedral in 2005. She served as a curate in Puddetown and associate priest, moving in 2014 to Milborne Port as Rector.

The Reverend Godfrey loves working in schools and has worked on vocation teams in both Salisbury and Bath and Wells.

DEVOUT Lyme Regis Christian Philip Sankey has been honoured by the Queen for his service to the Church of England. […]

THE St Michael & St George Roman Catholic Church in Lyme Regis has received a further £5,500 in grants to help with its ongoing restoration project.  […]

A FORMER Uplyme vicar has taken on the new role of associate priest at Smith’s Parish in Bermuda, just a few minutes from Lyme Regis’ twin town of St George’s. […]