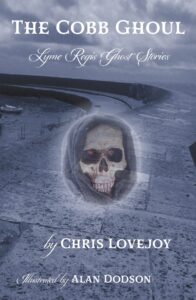 LYME Regis historian and tour guide Chris Lovejoy has written a book of chilling ghost stories based on moments in the town’s history.

‘The Cobb Ghoul’ contains 16 tales, some rooted in fact and others more fanciful, set in familiar local locations, from the Pilot Boat and Angel pubs to the Old Monmouth hotel and the Marine Theatre, as well as taking in the Horn Bridge, St Michael’s Church and the Cobb.

The book is named after the story of a young lad who died in wrongful captivity in a building on the Cobb, and is now said to haunt the harbour.

Other stories include ‘Little Gypsy Rose’, about a young flower seller who died under the wheels of a carriage, and ‘The Vampire’, featuring a priest who visits patients at the leper hospital with not-entirely-charitable intentions.

And, of course, the Pilot Boat’s famous Lassie dog makes a ghostly appearance too.

Chris is well known in Lyme Regis through his popular history walks and ghost tours, for which he wears a distinctive stovepipe hat and black cloak.

Originally from Berkshire, he grew up in Kent and London and has also spent time living abroad, including several years at an ashram in India. He has worked in the law, the creative arts and teaching, and moved to Lyme in 1997.

‘The Cobb Ghoul’ is Chris’ first published book of stories, although he has enjoyed writing fiction for some years and has been a member of the Black Dog writing group in Uplyme.

The supernatural is one of the subjects in which he feels most at home.

“Ghost stories excite us because they take the reader to the extremes of human experience,” he said.

“They bring the hidden, the unexpressed, to the fore and lead us into a mysterious, dangerous world – but we know we can return safely to our everyday life. We can feel the chills without catching a cold.”

The book contains illustrations by Alan Dodson, who lives in Charmouth, and has been designed and published by Olivia Daly, also of Charmouth. It is now in stock at Serendip bookshop in Broad Street, Lyme Regis, for £10.

SEPTEMBER 15 marked the 80th anniversary of the Battle of Britain, one of the most pivotal moments in Britain’s triumphant win over Nazi Germany during the Second World War. […]

A COLLECTION of more than 100 original programmes from the Regent Cinema in Lyme Regis, dating from 1948 to 1955 and found in impeccable condition at a flat in Rickmansworth last year, are now the subject of a fascinating new display at the town’s museum. […]