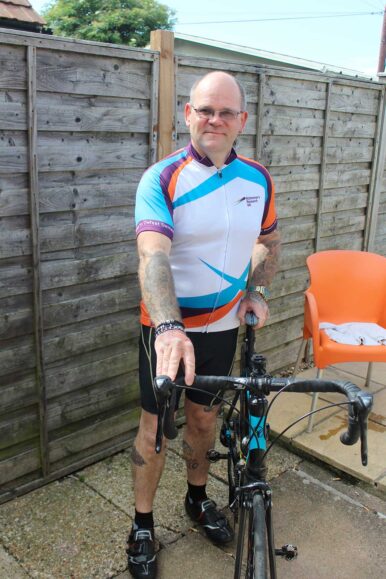 The challenge will take Clinton on a 100-mile cycle ride around the capital city and surrounding areas, which he hopes to complete within eight hours.

Similar to the London Marathon, Clinton had to apply to take part and was one of 600 cyclists chosen by ballot from 70,000 applicants.

He has previously taken part in charity cycle rides, including one from Land’s End to Lyme Regis in aid of Candles On The Cobb, and around Wareham for Cancer Research UK.

Clinton chose to raise funds for Alzheimer’s Research UK because his family has been directly affected by the disease and he hopes more research can be carried out to help find a cure in the future.

To help him reach his fundraising target of £600, Clinton and his family will be hosting a curry and disco at Lyme Regis Football Club on Saturday, July 13, with entertainment kindly provided by Wessex Star Disco.

food will be provided by the Royal Lion Hotel.

Tickets cost £7.50 and are available from Finishing Touch hairdressers on Church Street or by contacting Clinton or his wife Karen via Facebook.

LYME Regis based reforestation charity The Word Forest Organisation will be hosting its first tree awareness week from March 15 to 21.  […]

LYME Regis Town Council may scrap its community grants for local organisations this year, due to the financial pressures of the coronavirus pandemic. […]

LymeOnline editor Francesca Evans is joining the nationwide 2.6 Challenge to help save UK charities which are struggling to fundraise during the coronavirus pandemic. […]