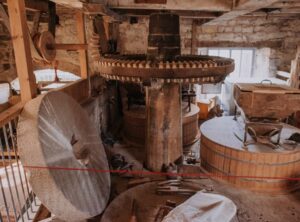 “AN awful disease, originating in China, has swept across the world to England, seriously affecting the population. The people of Lyme Regis are in desperate need of flour and the recently restored Town Mill has risen to the challenge.”

Sound familiar? Yes, this is all happening now but this quote is about the remarkably similar events that took place in Lyme more than 650 years ago!

The 1330s and 1340s were very difficult times for people living along the south coast of England. King Edward III desperately needed funds to continue fighting for lands in France. Despite him being declared King of France, the French continually raided along the coast of England, burning and ransacking towns such as Dover, Southampton and Portsmouth leaving the population frightened and desperate for food.

To compound the king’s military problems, the Scots were fighting for independence requiring large sections of the English army to be directed north.

In 1338, to fund these wars, taxes were once again demanded and, in an attempt to meet their obligations and to provide desperately needed food, the people of Lyme applied for permission to build a new corn mill on the site where a previous one lay derelict.

In 1340 a King’s Decree was issued, though this was not signed by the king himself as he was busy fighting the Hundred Years War against the French. We don’t know exactly when the new mill – now known as the Town Mill – came into operation but it cannot have been more than just a few months before the people of the town were engulfed in a world catastrophe.

In China in 1346 the most fatal pandemic recorded in human history arose. It was known as The Plague, later called the Black Death. A version of bubonic plague, it was transmitted by fleas on rats and infected people who then travelled along the Spice Route by camel and also on cargo ships to the Mediterranean countries.

Recent research suggests that human fleas were mainly responsible for the transmission. In June 1348 it arrived in England carried by French fishermen to the village of Melcombe Regis, now Weymouth. By the end of 1349 it had killed between 40% and 60% of the entire English population.

We have no details of life in Lyme Regis at that time but the new mill must have been a mainstay, even though harvesting wheat was a significant problem due to the serious shortage of farm workers.

By no means as serious, this new COVID-19 ‘plague’ is history repeating itself and, once again, the Town Mill has risen to the challenge.

Wheat and spelt continue to be milled and flour sold once a week outside the mill under social distancing conditions, as well as daily at Lyme Regis Butchers.

In these strange times, The Town Mill is also acting as a hub for the Lyme Bay Fishing Company, offering its fresh catch of lobster, crab, scallops and fish while the Courtyard Café is selling bread, and The Millside restaurant nearby is doing a greengrocer offering. Lyme Regis Brewery is also actively producing and distributing its popular beers.

So, all these centuries later and in these difficult circumstances, once again the Town Mill, with its courtyard businesses, continues to serve the local community.

Charmouth to take part in ‘Battle’s Over’ event

CHARMOUTH Parish Council will be playing a part in Battle’s Over, an international commemoration marking 100 years since the guns fell silent at the end of the First World War. […]

Dorset Council to discuss its response to coronavirus pandemic

DORSET Council will be discussing its response to the coronavirus pandemic and progress made against targets in its Council Plan at a Cabinet meeting today (Tuesday). […]

Share your school memories of St Michael’s for 190th anniversary

ST Michael’s Primary School in Lyme Regis is looking ahead to its 190th anniversary in 2024. […]