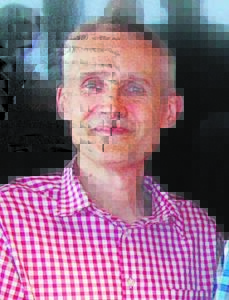 AFTER almost ten years at the helm of Lyme Regis Museum director David Tucker has announced that he will be stepping down at the end of the year.

Mr Tucker helped to secure funding for and led the museum through a £1.5million extension project, with the modern Mary Anning Wing opening in 2017.

He has steered the attraction through the coronavirus pandemic and seen it celebrate its 100th anniversary this year.

Announcing his resignation, Mr Tucker said: “It’s been a great honour to lead the museum since 2012.

“I was very lucky to be in the right place at the right time to nudge the construction of our the Mary Anning Wing forward, I was able to build on the solid foundations left by my predecessors and fortunately had a fantastic team of volunteers and colleagues to do the heavy lifting for me.

“I’ve been doubly lucky to have some fantastic mentors, most notably trustees Stephen Locke, Alan Kennard, John Dover and Sam Hunt. I would have been utterly sunk without Bridget Houseago, our excellent operations manager, volunteers Richard and Barbara Bull, our great front of house team and of course our talented local geologists.

“Now we have the extended museum it is a constant joy to see people learn more of Lyme’s stories. It’s a delight to talk to children in the museum, especially the little girls and encourage them to be interested in science – just like Mary Anning.

“When all’s said and done, I’ve been paid to work at the seaside and meet famous people. What other career would give me the chance to work with Sir David Attenborough, Kate Winslet and the incomparable Channel 5 icon Milkshake Monkey?

“During lockdown I’ve been able to hold meetings in deckchairs at the Kiosk and have sorted out the problems of the country over a cuppa with our lovely patron Tracy Chevalier.

“Of course, there’s been a few challenging times and a lot of things I’d do differently. There’s certainly been too many occasions where I’d have been better off keeping my mouth shut, especially in a place like Lyme, that seems to love a good argument!

“Museums might collect things, but they are about people. I would never have got to university, met my wife or had the exciting museum career I’ve had without the inspiration of visits to museums as a child. I know museums can change lives, because they changed mine.

“But what of the future? I’m going to have to get a full time job, but who knows what? I reluctantly accept that I’m out of the running to replace Daniel Craig as the next James Bond and I might well end up as a driver or waiter. Let’s just see what happens!”

LYME Regis Museum is looking for enthusiastic people who love the town and its history to join a variety of roles within its team of dedicated volunteers. […]

Never let the truth get in the way of a good story!

A FEW years ago a popular survey identified that museums and universities were regarded by the public as the nation’s two most trusted bodies. […]