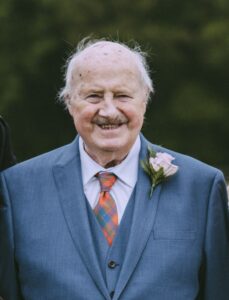 He was known to many in Lyme Regis for his volunteering with Save the Children, the RNLI, St Michael’s Parish Church and the Abbeyfield Society.

John was born on January 27 1923 in Beckenham, Kent, the eldest of four boys and one girl, and attended school in Beckenham.

The Second World War put paid to his ambitions of going to university to read history, and in 1942 was posted by the RAF to India, and later to Burma, to work in radar.

At the time radar was relatively new and it involved a considerable amount on skill to use co-ordinates to identify the position of enemy aircraft.

John greatly enjoyed these challenges and at o e stage was sent to train the US radar operators when they arrived in India. He returned to the UK in 1946.

After the war, John joined the family building business, Syme & Duncan Ltd, which had been founded in the 1860s.

He had little formal training and, given the pressures on the company to help repair war damaged buildings, he had to learn on the job.

He married Audrey in 1951 and they went on to have two sons and two daughters. As their children grew up, the couple also fostered 21 children, which John greatly enjoyed having around at home.

He retired in the early 1980s when he and Audrey moved to Lyme Regis and volunteer work then became his new life.

He was the treasurer of both Abbeyfield and the parish church up until last year, as well as helping to raise funds for Save the Children.

John had a long association with Abbeyfield and in 2017 was presented with a lifetime award for his contribution to the society.

During Lyme Regis Lifeboat Week he would organise the sand sports races and judging of the sandcastle competition, as well as collecting.

As a sporting fan, he led football training at the Woodroffe School for a short time, and enjoyed cricket from a very early age, playing for his local team from about 1939.

He played league cricket at a high level into the 1950s as the team’s opening left-hand bat, eventually playing his last game for the club aged 67.

John wife Audrey died in 2014 and he is survived by his four children – William, Mary, Patricia and David – together with 15 grandchildren and eight great-grandchildren, many of whom live locally.