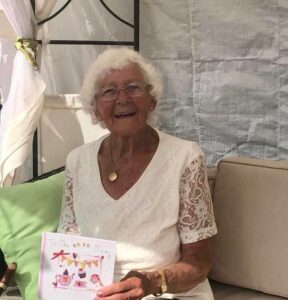 LYME Regis was saddened this week by the death of one of the town’s most popular pensioners.

Anne Thirlwell, who lived in Summerhill Road for more than 50 years, died peacefully on Tuesday, April 5 in a Yeovil nursing home after experiencing a serious fall in November. She was 89.

Mrs Thirlwell was a member of the highly respected Wiscombe family and was brought up at the Beach House Cafe, which was run by Granny Wiscombe and her daughters. Her mother was Phyllis Cleal (nee Wiscombe).

Mrs Thirlwell was educated at St Michael’s School, leaving at 14 to work in Brewers, the Broad Street grocers, and later at Haddons fashion shop.

Mrs Thirlwell was very popular growing up and was a regular at the dances that were held at the Royal Airforce Marine Craft Unit. It was there that she met her husband, the late ‘Geordie’ Thirlwell.

The couple were married in Lyme in 1955, and lived for two years in Gibraltar where Mr Thirlwell was stationed before leaving the Air Force and returning to Lyme Regis to live.

They were married for 52 years before Mr Thirlwell’s death in 2007.

Mrs Thirlwell loved travelling both with friends and members of the Get Together Club, and one of her favourite holidays was a visit to Elvis Presley’s home, Graceland, in Memphis, USA.

She was a great supporter of many local organisations, especially Lyme Regis Town Band and was a friendly face at all their concerts. She was also a keen skittler.

The funeral service will take place at the East Devon Crematorium, Whimple, on Thursday, April 28 at 1.45pm. Family flowers only but donations if desired to Cancer Research UK.