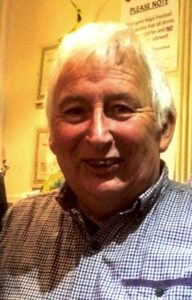 COLIN was born in Lyme in 1952, the son of Alan and Peggy Larcombe, and grandson of Herbie and Olive Larcombe, and Syd and Ruth Hansford; brother to Brian, Lin and Howard, partner to Linda, father to Sophie and Simon and grandfather to Sam, Jake, Buddy, and Ollie.

Colin grew up amongst close friends in Corporation Terrace and Anning Road, playing as all did in those days in the playing fields and wandering as far as Middle Mill and Church Cliff or ‘Back Beach’… and of course ‘The Gully’ – the place of unlimited imagination, camps, corrugated iron sheet tobogganing, mud slinging, and dawn ‘til dusk play for all in the area.

Colin attended St Michael’s and The Woodroffe, and on leaving school followed his father, grandfather and great grandfather, as a builder. He was apprentice to Eli Emmett and attended Weymouth College before quickly setting his up his own building business at the age of 20.

Roy Emmett had a lot of confidence in Colin’s building ability and potential, and didn’t want him to leave but understood when Colin resigned to build his own business. He was a very good builder and inherited his dad’s and grandad’s practical sense to problems.

He worked hard; was clever and resourceful, and applied the building that was in his blood to successfully undertake a wide range of new build and maintenance work in the locality, employing many in the town he valued for their skills and who became lifelong friends.

He was always active; regularly moving house, leaving them very different from their acquired state. The transformation of them was quite remarkable and underlined his building skills and ability to see the potential in every property.

He bought land at the old railway site and built from scratch ‘Larcombe Building Supplies’ which he later sold, on his retirement, to Travis Perkins, which is still operating from the same premises Colin built adjacent to the Clappentail roundabout on Uplyme Road.

Building in Lyme is and always has been challenging with its local ground conditions; the balance of expectation, and land and conservation regulation – and this challenge was made even worse in the building slumps of the 1980s.

He believed in fairness and honouring his commitment to others, and when the building industry took a downturn he did all he could to help save local jobs.

Colin was always fascinated by the sea, beginning in the early days with grandad Larcombe’s fishing boat and its annual spring launch; riding inside the boat on the back of Jack Reed’s coal lorry as it went up Broad Street and down Cobb Road to its mooring – Lyme was very different in those days.

Once launched, many very early Sunday mornings would be spent fishing with grandad out in the bay with the sound of St Michael’s Church bells ringing across the water.

Like many kids of the early 60s, Colin would crew on the local mackerel tripping boats, helping to fix and bate lines for the visitors as they tried their luck fishing in the wooden boats from the Cobb – boats with the memorable names we can all recall.

Hard times became better and he was introduced to sailing by long-standing friends with whom he shared many trips and ‘adventures’, some might call ‘exhilarating moments’, when sailing in the wine races to France and, in particular, the trips across the Bay of Biscay, coming home from the Med, and to Iceland when conditions really tested the resolve and sailing skills of friends and fellow crew Brian Dale, Pete Fortnam and Mickey Case.

Colin openly admitted he could never swim but perhaps given the conditions they often found themselves in, it wouldn’t have made any difference, brave though it was.

He was a member of Lyme’s Round Table and Rotary Club, and remained a keen supporter of Lyme Regis Football Club, watching with friends, sharing analysis of the game in the club house afterwards – and no matter what the situation would always ask of the score for the games he couldn’t get to.

He moved to Beaminster to be close to his daughter Sophie and son Simon, and help in the business he set up in the town which Simon still runs.

Our father used to impress on us “there’s no such word as can’t” and Colin’s ethos was one of ‘can do’ practicality, no fuss, and self-determination while also helping others, and above all family and friends.

So much done in a rich life with so many people who meant so much to him. His passing was all too sudden and too young, but hopefully he has left his being with many friends in the town he was born in and cared so much about.