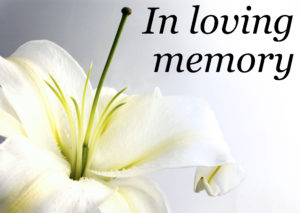 LYME Regis is mourning seven respected citizens who lived in or had strong associations with the town.

Born and bred in Lyme, Maureen Wheeler (nee Hallett) was a member of one of Lyme’s oldest families.

She lived in Cloverdale Court but died, aged 84, after a long illness in Fairfield House residential care home.

Maureen was the second daughter of Mr and Mrs Rex Hallett. Mr Hallett, the first Lyme man to enlist when the Second World War was declared, was killed in Italy towards the end of hostilities.

She married a local man, Bob Wheeler, and the couple moved to London where Mr Wheeler, who died several years ago, had a distinguished career with the London Fire Brigade, being awarded the MBE for his many years of service.

Mrs Wheeler moved back to her hometown after retirement and enjoyed an active social life, being a keen member of Lyme Regis Bowling Club. She was also secretary of the Woodmead Halls Management Committee for many years.

She is survived by her partner Ben and two children, Clare and Michael.

The town was saddened to hear of the death of Bernard Liddicoat, aged 88, who lived in King’s Way.

Mr Liddicoat came to Lyme when he was serving in the Royal Air Force on the Marine Craft Unit.

He married a local girl, Shirley Franklin, and made his home in the town, working as a milkman before running Staples Stores for many years with his wife, to whom he was married for 65 years. He is also survived by a son, Steve.

Former Lyme Regis Borough Council plumber Colin Larcombe, who lived in Lym Close, died aged 94 after a long illness. He is survived by his wife Eve and son Garry.

Accomplished singer and stage performer Edwina Piper, who lived in Cloverdale Court, died at the Shire House care home, aged 87. She was chairman of Lyme Regis Operatic Society for a number of years.

The town is also mourning John Hart, 81, who lived in Charmouth Road and was buried in Uplyme on Thursday afternoon.

Pat Loveridge, aged 92, also died at his home in Anning Road on March 30. He is survived by a son and daughter, Michael and Trisha.

TO understand the significance of the headline above, you would have to have been a pupil of the Lyme Regis Grammar School or the Woodroffe School. It’s the opening line of the old school song – ‘What High Endeavors Shall Our Voice Proclaim’. […]

Frank Bastin, one of East Devon’s most well known and popular figures, has passed away. […]