LYME Regis historian and author Peter Lacey has just published his first novel ‘Touching the Past’.

Having previously released two local history books – ‘Ebb & Flow: The Story of Maritime Lyme Regis’ and ‘Elizabethan Lyme’ – Peter’s latest release combines his historical research with the fictional life story of Sam, a baby boy who was abandoned and left to die on a dung heap in 1589.

‘Touching the Past’ is an enthralling historical novel set in Lyme Regis, Bermuda, Virginia and London, and spanning the years 1589 to 1653.

It will have you turning the pages to keep up with a fast-moving narrative that follows Sam as he is rescued and grows up in a violent society, where law breakers are subjected to harsh punishments and blood sports are a popular form of entertainment.

At just 12 years old and he goes to sea on a privateer seeking to plunder French merchant ships.

Orphaned for the second time he becomes a pack-horse drover and has deadly encounters with robbers.

Shipwrecked on Bermuda – then known as the ‘Isle of Devils’ – he survives despite religious discord and a mutiny, a fortunate discovery makes him rich.

After completing the voyage to Jamestown he returns to Lyme via London and buys a farm. Life on the farm is hard and unremitting and, while there is romance, there is also misfortune and tragedy.

During the Civil War and the Siege of Lyme, the farm comes under threat from Royalist soldiers.

There are several characters intrinsically linked to Sam’s life; a Devon seaman, a Welsh drover, an abused teenage girl, a titled gentleman and his wife, a young woman who is a deaf mute, and an African taken into slavery as a boy.

They all add an interesting dimension to the story while Sam struggles to come to terms with moral responsibility, religion and his illegitimacy.

The book will appeal to adults and older teenagers who like a compelling and adventure packed historical story that has been meticulously researched.

It is only available from The Lyme Regis Bookshop in Broad Street at an introductory price of £7.99.

Peter Lacey grew up in Middlesex and served in the Army. He later trained as a youth worker and eventually moved to Lyme Regis 42 years ago with wife Barbara when he took on the role of district youth worker for the Axe Valley, based at the Pippins Centre in Axminster.

Peter volunteered as a coastguard for many years. He now writes a regular history columns called ‘Tales of Lyme’s Past’ for the LymeOnline newspaper and website, previous editions of which can be read at lyme-online.co.uk/blogs/ 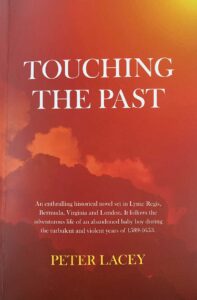 An extract from ‘Touching the Past’ by Peter Lacey

THE terrifying storm of February 1589 had the townsfolk of Elizabethan Lyme Regis in the county of Dorset trembling in their homes.

Vivid forked lightning lit up the dark and starless sky, it was followed by thunder that exploded like cannon fire. Added to this was the gale force wind which shrieked in a nightmarish manner while the driving rain caused flash-flooding.

Those most at risk lived in the lower part of the town known as Mill Green, it was here that the poorer inhabitants tried to survive in what was a life of grinding poverty. They lived in dwellings constructed of earth and clay reinforced with straw while the floor was of beaten earth.

Poorly thatched roofs covered the single room dwellings, a hole in the roof or wall letting out the smoke from a wood fire, when and if they managed to have one.

Furnishing was basic, a table, maybe a bench and if fortunate a bed of sorts. The alternative being an earthen sleeping platform with a straw filled bed sack acting as a mattress.

Platforms and beds were shared, adults and children were not always separated. The houses were a breeding ground for fleas, lice, bed bugs and other vermin which included rats.

It was from one of these hovels that the figure of a man emerged into the windswept night. The rain soaking through his meagre clothing left him gasping for breath, hampered as he was by the bundle clutched close to him.

He staggered across the unstable Gosling Bridge that spanned the normally placid river Lym which had become a raging torrent due to the prolonged rain.

He took shelter in the doorway of the Town Hall adjacent to the bridge, a dung heap of human waste caught his attention and it was on this vile smelling heap that he deposited the bundle he had been carrying. He walked away, not turning even when he heard the baby crying.

He was half way across the storm weakened bridge on his return journey when part of it collapsed pitching him into the flooded river. He surfaced only once as he struggled to save himself, nobody heard his scream of despair as he disappeared beneath the rushing water.

Some two hours later, Isaac Peters the town’s night watchman picked his way slowly and carefully along the rubble ridden Horse Street to inspect the bridge which was known to be unsound. His progress hindered by a wooden peg-leg, a memento from a sea fight when he sailed as a privateer come pirate.

Although the storm had eased slightly the wind caught him off balance and pitched him into the dung heap before he reached the bridge. Struggling to his feet he became aware of the abandoned baby who despite the weather was still alive.

Knowing it needed urgent care he made for his two roomed cottage in Sherborne Lane. Cut and bruised from his fall and partly covered in foul-smelling dung he lurched into his cottage calling out for his wife Mary, she gasped in surprise when she saw the wailing bundle.

WITH just four hours to go before it was time to light the candles and kick-start one of Lyme’s most impressive attractions, it was lashing down with rain. […]

LYME Regis has been chosen to host a unique nationwide gesture of remembrance for the men and women who left their home shores during the First World War, fronted by Academy Award-winning film producer Danny Boyle. […]