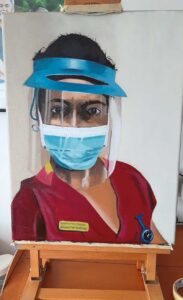 TALENTED Lyme Regis artist David Manners is paying his own tribute to frontline NHS nurses by painting their portraits.

Former schoolteacher David concentrates on the human form and maritime themes and his portraits are in huge demand with galleries in the United States and Mexico displaying his works.

In recent times he has painted portraits of former American President Barrack Obama and his wife Michelle, singer Gary Barlow and celebrity chef Nadiya Hussain and her husband.

Many artists up and down the country are painting portraits of NHS workers as the art community’s way of saying thank you in an initiative known as #portraitsfornhsheroes.

“It’s wonderful being able to paint their portraits,” said David.

“One of the first ones I have done was of a young nurse’s first day as a nurse in ICU at the Royal Devon and Exeter Hospital, who I had helped to pass her mathematics exam to qualify.

“None of the artists participating pay a penny but the nurses get their portrait as a gift. The first nurse I painted said it would be a lasting memento of her harrowing first day as a nurse in the renal unit.”

The nurse, who has asked not to be named, started studying in 2017, the first cohort of the Exeter School of Nursing (Plymouth University) with various nursing placements in East Devon.

“I was due to qualify in July 2020 but then the pandemic hit and it was decided that the third-year students would be appointed to assist with the frontline in supportive role in the NHS,” she said.

“Personally, the experience has been of mixed emotions. I did not intend for my nursing career to start with a pandemic experience, however, having said that I could not be any prouder about joining any earlier. It has been an honour to support fellow colleagues through this difficult time and I have grown in confidence and resilience to strive in my chosen career.

“One of the moments I will always treasure was reuniting a patient home after a strong battle with COVID-19. We all united in clapping for the occasion. It was incredibly emotional but a very proud moment.”

David was born and brought up in Lyme Regis and attended the Woodroffe School where his father, Brian, taught music.

After graduating in music and mathematics, he retired after 26 years teaching at Woodroffe and, after a long period of illness, he took up painting after a break of 35 years.

His unique style was quickly recognised in art circles around the world and his works in oil on canvas, especially his portraits, have won universal acclaim.

BUSINESSES and organisations that employ less than 50 people and are open under current government guidelines are being asked to register their interest in community COVID testing. […]

Gig club awarded £1,000 to help it through pandemic

LYME Regis Gig Club has been awarded £1,000 of National Lottery funding to help with running costs and overheads during the ongoing COVID-19 pandemic. […]

Lyme Regis Museum shares some of its most interesting finds from the old tip - have you ever found any treasures? #lymeonline #lymeregis #dorset https://t.co/3XGmkaeg8l
View on Twitter
0
2

The 1st Lym Valley Scouts sharpened up their shooting and archery skills at a centre just outside of Moretonhampstead #lymeonline #lymeregis #uplyme #devon https://t.co/VHgbEHp8c2
View on Twitter
1
1