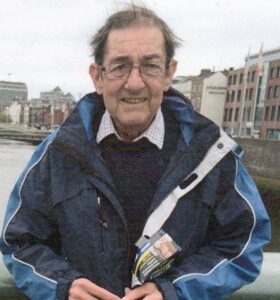 LYME Regis is mourning one of the town’s “lovable rogues”.

His funeral service was held at the Church of St Michael and St George, conducted by Canon Patrick Chrystal, a former priest at the Catholic church. The organist was Dr Richard Godfrey.

Jimmy was educated at The Woodroffe School. He joined the Army at the age of 16, serving in the Junior Leaders Regiment in Taunton and in a nine-year service was posted to Germany, Cyprus, East Africa and the Far East.

It was whilst serving in Northern Ireland that he witnessed his best friend being shot by a sniper, an incident which had a profound effect on the rest of his life.

Jimmy had a great love for gardening and nature and helped many in and around the Uplyme area where he lived. He was a member of the Lyme Regis branch of the Royal British Legion.

In a tribute to Jimmy, Philip Mostyn described him as “a lovable rogue” and said he would have been very proud that the Legion standard was paraded at his funeral.