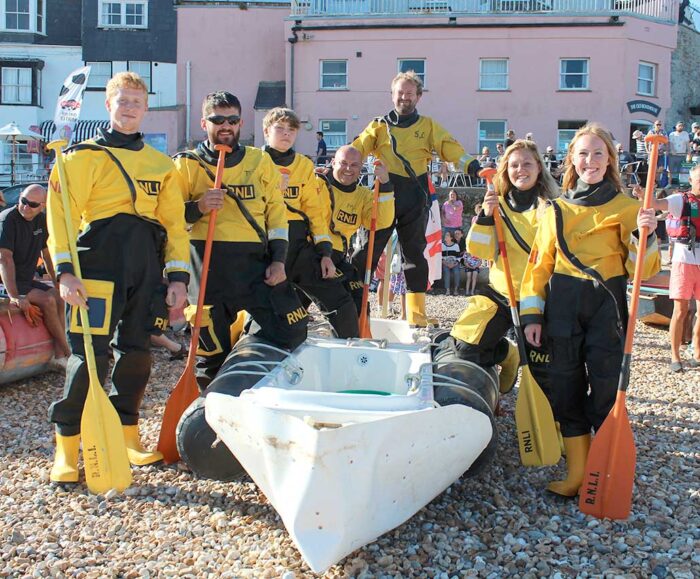 LYME Regis Lifeboat Week this year set an all-time record with a final total of £34,765 raised for the lifesaving charity.

Members of the organising group, the Lyme Regis and Charmouth RNLI Guild, along with lifeboat crew members, heard the news from treasurer Brian Cursley at their meeting last week.

Guild secretary Maggie Sullivan said new events this year had proved very popular and, despite poor weather at the beginning with just one or two events being re-scheduled, it had been an exceptionally successful week.

The meeting heard that the Army’s parachute display team, the Red Devils, had been extremely popular and general feedback from the public had been “terrific”.

The top ten achievers in relation to donations and participation were the water or wine stall outside the lifeboat station, sale of the programme, the fireworks display, breakfast baps, the duck race, Red Devils, the book stall, yard of ale, name the yellow welly dog competition and the swimming challenge.

Guild chairman Ken Lavery said: “ The hard work and dedication of all our volunteers has produced a remarkable result this year and the RNLI – the charity that saves lives at sea – will be proud of their efforts.

“The generosity of all those visitors and residents who donated to our charity must also be praised.

“But there was also sadness, and we pay tribute to Irene Roper, former chairman of the Guild, who died during this year’s Lifeboat Week.

“She worked tirelessly for our charity for several years and was passionate, in particular, about Lifeboat Week. We are delighted that Irene’s sister, Maggie, is continuing as secretary of the guild because, as Maggie says, that is what Irene would have wished.”

RNLI’s Blessing of the Boats cancelled

LYME Regis lifeboat crew has cancelled its annual Blessing of the Boats service due to the ongoing coronavirus epidemic.  […]

AN 11-year-old schoolboy from Uplyme has raised almost £800 for Devon Air Ambulance by cycling to Scotland in less than five days. […]

A LYME Regis resident has received an award for more than 50 years of voluntary service to the town’s lifeboat crew and coastguards.  […]