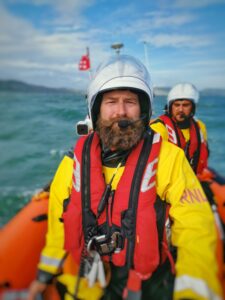 RNLI volunteer Seb Cope is the latest crew member to achieve the role of helm aboard Lyme Regis’ inshore lifeboat.

The 38-year-old architectural designer, who joined Lyme Regis lifeboat crew five years ago, passed out as helm after a one hour written test and a two hour assessment of his skills at sea.

He is now one of seven helms based at the town’s lifeboat station on the Cobb.

Seb said: “I am delighted to have fulfilled an ambition I have had ever since I joined the crew.”

Seb, who became a sea-going crew member just one year after joining, was tested on several scenarios at sea including anchoring, veering and a search for two missing kayakers.

He added:” The assessment was pretty gruelling particularly after a day at work, but I now look forward to the opportunity to teach and train others.”

Volunteer lifeboat operations manager Nick Marks said: “Congratulations to Seb. He has worked hard over the last couple of years and has not been helped by the restrictions imposed by the pandemic.

“He is stepping up at just the right time as we head into the busy summer period.”

All welcome at annual Blessing of the Boats

THE annual Blessing of the Boats service will be held on Sunday, May 6 at Lyme Regis Lifeboat Station.
[…]

THE joint authors of ‘Deepest Dorset’, a book which looks at what makes Dorset special, have donated £1,000 from sales to a charity they also regard as special – the RNLI in Lyme Regis. […]

COASTGUARDS are encouraging walkers and those enjoying the coast to use the ‘What3Words’ app so they can be easily found in the event of an emergency. […]