CREW members and supporters of the RNLI in Lyme Regis are staging an open day followed by the annual Blessing of the Boats service on Sunday, May 26.

The lifeboat station on the Cobb will be open to visitors from 10am to 2pm, followed by Blessing of the Boats at 3pm.

During the open day volunteer lifeboat crew and members of the fundraising group, Lyme Regis and Charmouth Lifeboat Supporters, will be on hand to talk about all aspects of volunteering for the charity.

The supporters organise many fundraising events throughout the year including Lifeboat Week, which this year starts on Sarturday, July 27.

Chairman of the supporters group, retired surgeon Ken Lavery, said: “Lifeboat Week is our major fundraising event and  donations during the week regularly total around £30,000.

“Our volunteers are incredibly enthusiastic, but we could always do with more help so we thought we would hold an open day in the hope that we might interest more people to join us. We are a very friendly group and there are plenty of social activities during the year.”

Lifeboat operations manager Nick Marks also hopes to attract some interest from men and women who may want to join the volunteer crew.

“We hope the open day will give an opportunity for visitors to discuss with us how the lifeboat operation works and if we find a few people who would like to join the crew so much the better,” he said. 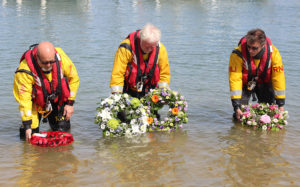 Anyone interested in joining the supporters group can do so on May 26 or call membership secretary Anne Marks on 07802 675 985.

The Blessing of the Boats  inter-denominational service at the lifeboat station will be conducted by local clergy and will be accompanied by the Lyme Regis Town Band.

The service will include prayers and hymns before wreaths are carried to the water’s edge (pictured left) and later taken out in the bay by the lifeboat crew, to remember all those lost at sea.

LYME Regis Community Week will be held in for the third time this summer to raise funds for local organisations and the Red Arrows display. […]

Support needed to keep Marie Curie Nurses on the frontline

MARIE Curie has launched an emergency appeal following a devastating loss of income from hundreds of cancelled fundraising events and the closure of their charity shops. […]

TOURISTS coming to Dorset are being urged to plan ahead and respect communities across the region as the Bank Holiday weekend gets underway. […]

Lyme Regis Museum shares some of its most interesting finds from the old tip - have you ever found any treasures? #lymeonline #lymeregis #dorset https://t.co/3XGmkaeg8l
View on Twitter
0
2

The 1st Lym Valley Scouts sharpened up their shooting and archery skills at a centre just outside of Moretonhampstead #lymeonline #lymeregis #uplyme #devon https://t.co/VHgbEHp8c2
View on Twitter
1
1