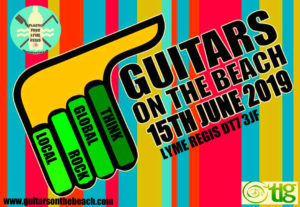 GUITARS On The Beach 2019 is to postpone its annual bid to break the record for the world’s biggest band – in order to rock against climate change instead.

The popular Lyme Regis guitar festival – this year to be staged on the beach on Saturday, June 15 and principally sponsored by the UK’s most famous music store, Andertons Music Company – is to throw itself behind the Turn Lyme Green movement, providing a platform for Plastic Free Lyme Regis and other local eco-initiatives.

A GOTB spokesperson said: “We’re still asking as many guitarists as possible to come along and play together on the beach, but this year we will all be playing for a far more important aim than setting a world record – saving the planet.

“We’re adding our voice and guitars to the calls on the climate change emergency because if we don’t stop global warming it will soon become too hot to even go on a beach.”

GOTB has teamed up with Turn Lyme Green and Plastic Free Lyme Regis to join the movement for a reduction in fossil fuels, cutting CO2 emissions, greater recycling, clean seas and an end of single-use plastic.

The spokesperson added: “Friends Of The Earth have a slogan, ‘Think Global, Act Local’, so we’re starting locally by backing the drive of Turn Lyme Green. In our case it’s ‘think global, rock local’.

“Both Turn Lyme Green and Plastic Free Lyme Regis will have stalls and supporters on hand at Guitars On The Beach, providing advice on how we can all do our bit to make a difference and tackle this climate change crisis.

“In particular, we’re asking that everyone attending Guitars On The Beach this year does not buy throwaway bottles of water and that instead they bring their own re-useable containers which can be refilled free at the taps on the seafront and also at one of our main sponsors down on the beach, SWIM.”

The guitars event will also showcase the Yawl Spring Water company, which recently launched a scheme to replace plastic bottles in the home with a new rechargeable eco-gadget which dispenses woodland water tapped from an underground spring in Uplyme.

The spring water initiative is supported by another of GOTB’s main sponsors, Lyme Bay Holidays, which is keen for the dispenser to be installed in all of its properties.

And as climate change campaigners are calling for an urgent reduction in meat consumption to cut greenhouse gases from livestock, former Lyme fishmonger Simon Bennett will be present to promote his new cook book, ‘The Wet Fish Book’, which explains how families can help the planet by eating more fish.

The music at the all-day event, running from 10am to 10pm, will also be spreading the message. For the mass play-along session, traditionally held about 4pm when all the guitarists on the beach perform together, this year organisers have included in the ‘easy-to-play’ set songs by anti-climate change rock stars Jackson Browne and Neil Young – Browne’s ‘Running On Empty’ and Young’s ‘Rocking In The Free World’.

The other songs in the play-along, which forms the highlight of the famous event, created six years ago to encourage guitarists of all ages and abilities, are: ‘Have You Ever Seen The Rain?’ (Creedence Clearwater Revival), ‘Life’s Been Good’ (Joe Walsh), ‘Shotgun’ (George Ezra), ‘Place Your Hands’ (Reef), ‘Born To Be Wild’ (Steppenwolf), ‘La Bamba’ (Ritchie Valens), ‘Tulsa Time’ (Sheryl Crow), ‘Jumping Jack Flash’ (Rolling Stones), ‘Love Shack’ (The B-52s), ‘Come Up And See Me’ (Steve Harley) and Cliff Richard’s ‘On The Beach’.

And in a tribute to Buddy Holly, 60 years after the death of the guitar pioneer, all guitarists will also be invited to join in on a set of his hits, including ‘Peggy Sue’, ‘Not Fade Away’, ‘Oh Boy’ and GOTB’s traditional theme song, ‘Rave On’.

One lucky person at the beach party will be going away with a top new guitar – a collectors’ item of which there is only one in the world. Details of how to win the one-off guitar donated by Andertons will be announced shortly.

The GOTB spokesman said: “Guitars On The Beach is hugely appreciative of the backing from all of our generous sponsors, who essentially enable the event to happen.

“This year Andertons are providing all of the amps and drums and backline equipment for the bands performing; we’re very grateful to them and to our regular local sponsors like West Bay’s Snack Shack, SWIM, Lyme Bay Holidays, Lyme Regis Town Council and our other kind supporters.”

A full list of all of the sponsors and supporters is on the website www.guitarsonthebeach.com and on the Guitars On The Beach Facebook group, where guitarists can also find chord sheets for all of the play-along songs.

Guitars On The Beach began in 2013 when 2,276 guitarists came together to perform ‘Rave On’ and set a new UK record as Britain’s Biggest Band.

A year later GOTB broke its own record when a reported 3,000 guitarists assembled to perform ‘Smoke On The Water’, led by Deep Purple frontman Ian Gillan.

The world record for the greatest number of guitarists playing together is held by Poland, where 7,411 guitarists gathered in Wroclaw in 2018.

AT a time of year when we all love Christmas trees, spoken word poets and musicians are inviting all to join them in supporting a charity that plants them too! […]

LIANE Carroll, who is headlining Jazz Jurassica’s festival finale this coming weekend, is one of the finest female singers this country has ever produced. […]

THE Marine Theatre in Lyme Regis will host a special concert of ragtime and rockabilly on handcrafted instruments by the Lym Delta Rhythm Kings. […]