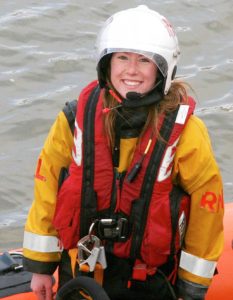 THE third emergency call-out of the year was the first ever for Georgia Robson, only the fourth woman to join Lyme Regis lifeboat crew.

And the occasion was certainly one she won’t forget, as she was in the dentist’s chair when her pager sounded the alert on Friday.

“I just had to apologise and explain why I had to leave,” said Georgia, “and I have now made another appointment to finish my treatment.”

Lyme-born Georgia, 24, joined the volunteer RNLI team as shore crew just over a year ago and recently qualified as a sea-going  member of the team.

She said: “We were called to investigate an unidentified object floating near the promenade at West Bay, so it was just a little worrying as to what we would find.

“It turned out to be nothing more serious than a large marker buoy but, of course, when the coastguards receive a call from a worried onlooker we have to go.

“I just love being a member of the crew and will have to be patient for my second opportunity to go to sea on a shout.”

The lifeboat was launched at 11.52am and returned to Lyme Regis harbour an hour later.

LYME Regis lifeboat launched in rough sea conditions on Friday, October 12 to a report of a person in the water near Chesil Beach. […]

LYME Regis lifeboat crew were among those called to a major emergency services operation in Seaton on Good Friday.  […]