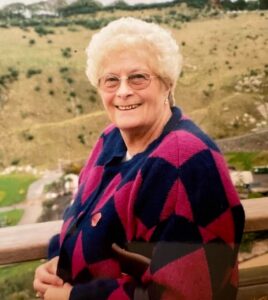 LYME Regis has been greatly saddened this week by the death of former resident Margaret Hercock who played a major role in the community life of the town for many years, supporting a number of local causes.

Mrs Hercock, aged 90, lived in Exeter and died at the Royal Devon and Exeter Hospital after being admitted on December 23.

She was the wife of the late Ron Hercock and is survived by her two sons, David, who lives in America, and Andrew.  The family lived in Jericho for many years.

A funeral service was held at Exeter Crematorium on Wednesday at which the eulogy was delivered by her son, David.

Mrs Hercock was born in Stalbridge in Dorset and lived in Milborne Port. She went to the local school where she nurtured her love for music, especially singing.

As a young woman Mrs Hercock contracted tuberculosis and was sent to recuperate in the healthy sea air at Eastbourne in Sussex. At the same time, also for TB reasons, her future husband, an ex-Royal Navy Petty Officer, was staying in Eastbourne where they met.

The couple were married in 1953 and moved to Lyme Regis, renting a small flat in Ozone Terrace before moving to Summerhill Road and then to a new three-bedroom bungalow in Jericho. They were married for 62 years.

Mr Hercock worked for Lloyds Bank and the couple soon immersed themselves in the community life of Lyme Regis, becoming members of Lyme Regis Operatic Society, among others, with Mr Hercock acting as treasurer for several local organisations.

They were both cast members of ‘The Golden Revenge’, which the operatic society staged at the Northcott Theatre in Exeter, as well as in Lyme Regis, to celebrate its 50th anniversary

The same piece of music that Mrs Hercock walked down the aisle at her wedding was played at the funeral service.