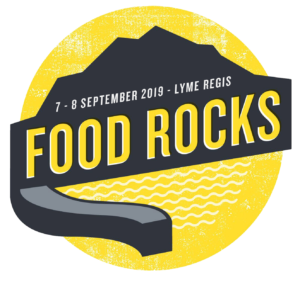 Following the success of last year’s Glenarm Estate Meat Feast, the dinner will again kick off the festival on Friday, September 6, held in the festival marquee in Lister Gardens and hosted by Mark Hix and his beef supplier Peter Hannan, giving guests the opportunity to ‘Meet the Producer’.

The annual Crab and Mackerel Supper Club, sponsored by Weymouth’s Crab House Cafe, will also take place in the marquee on the evening of Saturday, September 7.

Both of these events are ticketed celebrations for festival goers to book in advance and always sell out. New to this year’s event, supper club visitors are invited to continue the celebrations at local restaurant and Food Rocks sponsor SWIM, below the marquee on Marine Parade, to dance the night away with DJs and cocktails.

The two-day food extravaganza, curated by Mark himself, will bring together the best across both the food and drink worlds, from celebrated chefs to local producers from the surrounding regions. Headline sponsors include Clarence Court, Tracklements, Lyme Bay Winery, Lyme Bay Holidays, Palmers Brewery, twentyretail and Fever Tree.

Taking place on September 7 and 8 and free to attend, visitors to the festival will be able to experience a jam-packed schedule of exciting cookery demonstrations, insightful talks and gastronomic tastings of the local produce on offer. Not only that but there will be music performances from local charity B Sharp and morris dancing from the Bakers Dozen.

Producers already confirmed for the festival include Black Cow Vodka, Somerset Membrillo, Conker Gin, Hundred-Aker-Pottery and many more. Alongside the producers will be the usual mouth-watering street food offering including Billy Winters Cafe, The Pig Hotels, Somerset Hog Roast and Café Meru.

With more than 50 food and drink stands already confirmed, the festival is set to be bigger and better than ever before.

Chef demos will be held throughout the weekend in the festival marquee, with the programme including Mark Hix, Mitch Tonks, Angela Hartnett, Rose Prince and many more. Demos will take place between 11.30am until 5.30pm both days, with Mark joining many of the hosts on stage throughout.

Many of the dishes will use by-catch, with local fishermen bringing fish and seafood to the demo stage throughout the day, and guests can sample all the dishes for a small donation to the festival’s chosen charities, the RNLI and Fishermen’s Mission.

Tickets for both the Glenarm Estate Meat Feast and Crab and Mackerel Supper Club are priced at £45 and are available via the HIX website www.hixrestaurants.co.uk

Is some summer fun on the way?

DARE we hope for some semblance of a Lyme Regis summer we so missed last year? […]

THE two biggest events of the Lyme Regis calendar have been cancelled due to the coronavirus pandemic. […]