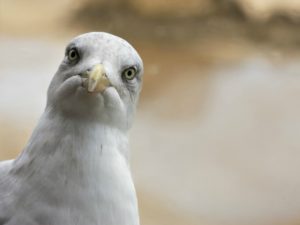 RESIDENTS and visitors of Lyme Regis could be fined £100 for intentionally feeding seagulls when new rules are enforced later this year.

West Dorset District Council has drawn-up new rules about public places, in particular feeding gulls, which will come into force on April 23.

More than 500 people have had their say about how public spaces in West Dorset should be managed.

Restrictions on consuming alcohol in public remain largely the same and do not affect Lyme Regis, but new rules about feeding seagulls are being introduced in the West Dorset Anti-Social Behaviour Related Public Space Protection Order 2018.

The new rules aim to reduce the problem of aggressive gulls, which are known to regularly snatch food from people, sometime causing injury.

The rules state that “no person at anytime shall provide or deposit food for consumption by gulls within the feeding of gulls restricted area”.

The restricted area in Lyme Regis includes Cobb Gate, Broad Street, Pound Street, Cobb Road, Lister and Langmoor Gardens and the seafront area, including Marine Parade and the Cart Road, Gun Cliff Walk, East Cliff Walk, the main shingle and sandy beach, Church Cliff Beach, the Cobb and harbour, and Monmouth Beach and car park up until the end of the chalets.

Anyone found to be breaching the new rules could be fined £100 to be paid within 28 days, which will be reduced to £75 if paid within 14 days.

Councillor Alan Thacker, Community Safety & Access portfolio holder for West Dorset District Council, said: “I would like to thank everyone who took the time and trouble to have their say and let the district council know how they think public spaces should be managed.

“We looked carefully at the results and have tried to take a common sense approach, which aims to reduce anti-social behaviour still further and reduce the problem of aggressive seagulls.”

The new public space protection order can be read in full at http://bit.ly/2GaL4fs

LETTER: What is being done to stop town being over-run by seagulls?

I READ with interest your articles in LymeOnline, and like the title ‘Lyme Matters’ for Philip Evans’ column, but if Lyme really ‘matters’ what is being done to stop it being over-run by seagulls? […]

Bringing together all the elements for the perfect picture

IT makes you feel it well worth following through with a planned idea for a photograph on the beach at Charmouth when you get a snap like this. […]