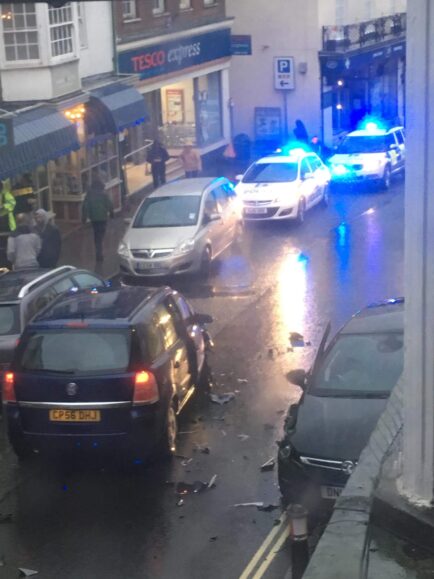 BROAD Street in Lyme Regis was closed for nearly three hours early evening on Saturday after a three-vehicle collision at the top of the town.

There were no reported injuries but the two female occupants of one of the vehicles involved got out of their car and ran down Sherborne Lane, according to witnesses.

Later the police issued the following statement: “We were called at 6.15pm on Saturday  to reports of a three-vehicle collision in Broad Street in Lyme Regis, involving a black Vauxhall Astra, blue Vauxhall Zafira and grey Toyota Avensis.

“It is reported the driver of the Astra failed to stop at the scene. Enquiries are underway. No arrests have been made.”

The main road through the town was blocked and re-opened just before 9pm.

THE emergency services were also called to two-vehicle crash at the A35 Lyme Regis-Charmouth roundabout near Wood Farm Caravan Park on Saturday morning.

Firefighters from Bridport and Axminster stations attended to make the scene safe and assist with casualty care. Anb air ambulance paramedic passing in his car assisted with the casualties but it is not thought anyone was seriously injured.

Police said they were alerted by the ambulance service at 10.35am to a two vehicle collision.

THE RNLI has said it is “lucky to have such wonderful supporters” after Lyme Regis lifeboat crew were sent an anonymous letter, praising their dedication and bravery.  […]

Why we had respect for the police

I AM of an age that I can remember when Lyme Regis Police Station in Hill Road was manned by one sergeant and at least four constables. […]

LYME Regis lifeboat was launched on the evening of Sunday, July 22 to a report of an overturned boat. […]