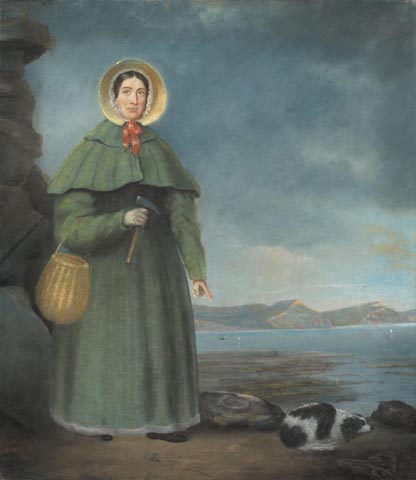 TOWN councillors have given their initial support for a statue of famous fossil hunter Mary Anning to be erected in Lyme Regis.

Mary Anning, who was born and lived in Lyme Regis on the site where the town’s museum now stands, had a major impact on the world of science, as her discoveries – including the first complete ichthyosaur – were some of the most significant geological finds of all time.

They provided evidence that was central to the development of new ideas about the history of the Earth. However, outside of the museum, there is no formal recognition of her connection with Lyme Regis, with her gravestone at St Michael’s Parish Church acting as the only memorial to her.

The suggestion of erecting a statue of Mary Anning was recently raised on social media, winning the support of several residents.

Speaking at last week’s Tourism, Community & Publicity Committee, chairman Cheryl Reynolds said she had also been approached by businesswoman Anya Pearson, from Dorchester, who was interested in getting a statue of Mary Anning erected.

Ms Pearson has connections with the organisation invisiblewomen.org.uk, which aims to recognise important female historical figures and has recently erected a statue of a suffragette in Parliament Square, London.

Councillor Reynolds said she believed that some funding for the statue may be forthcoming from the organisation and that Ms Pearson knew an “eminent sculptress” who may be willing to do the work for free.

Referring to the statue of Admiral Sir George Somers – a former Mayor of Lyme Regis who founded Bermuda after being shipwrecked off the islands in 1609 – which was erected in Langmoor Gardens two years ago, Councillor Reynolds commented: “We haven’t got a statue of Mary Anning, we have one of what’s his name in the gardens, who wrecked all his boats.”

Councillors gave their full backing to the proposal, and Councillor Reynolds will continue discussions to take the project forward. Proposed locations for the statue have not yet been discussed.

Lyme Regis Museum’s role in the making of ‘Ammonite’

MARCH 2021 saw Lyme Regis Museum celebrate its centenary. It was also by coincidence the month when ‘Ammonite’ Francis Lee’s 2020 film about Mary Anning is released. […]

Lyme shows off its history for visitors from Virginia

LYME Regis welcomed a visiting party from Virginia last week, as they toured towns and cities in the UK connected with the birth of America. […]

Mayor worked hard to get the best for Lyme Regis

Perhaps what I may have brought to this meeting just a few days ago, may not be as appropriate due to the change of circumstances over the past couple of days. […]