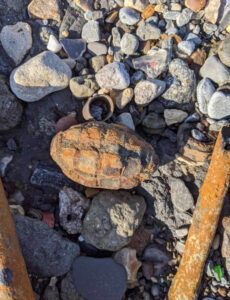 A CONTROLLED explosion was carried out on a Lyme Regis beach on Friday after a grenade was found.

Lyme Regis Coastguard team was tasked, alongside Dorset police, to possible ordnance found on the beach at Black Venn, Lyme Regis, at 1.24pm.

On arrival at the scene, the coastguard team located the first informant and liaised with the police to ensure the safety of all concerned.

Photos of the object were sent to the Royal Navy Explosive Ordnance Disposal (EOD) team in Plymouth and an immediate 150m exclusion zone was set up.

On their arrival, the EOD officers carried out a visual inspection and set up the necessary equipment to carry out a controlled explosion.

Once the grenade and the charge had been detonated, the area was rechecked, and the beach reopened.

POLICE officers were called to Lyme Regis beach this afternoon (Friday) after a suspected bomb was uncovered.  […]

Busiest weekend of year for coastguards

ACROSS the country, HM Coastguard responded to 447 incidents over the weekend to help people who found themselves in difficulty, making it the busiest of 2020 to date. […]

THE much-anticipated John Lewis Christmas advert was released on Friday inspired by random acts of kindness, and the RNLI is also asking for the public’s kindness as the charity re-releases its festive film starring members of the Lyme Regis crew. […]