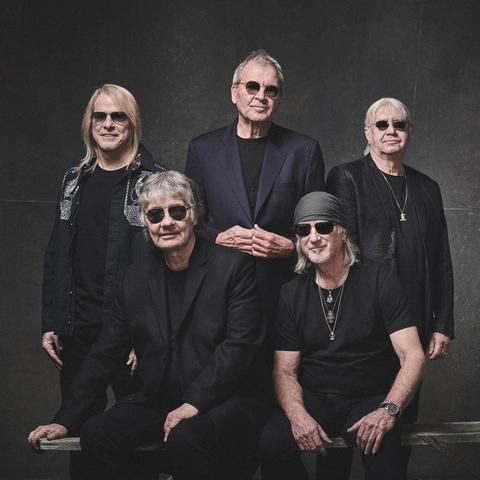 Formed in 1968, legendary rock band Deep Purple have produced 21 studio albums over the last 52 years, with Lyme Regis-based rock star Ian Gillan performing on 14 of them, including the band’s most recent record ‘Whoosh!’ which was released this month.

‘Whoosh!’ has been an instant hit with existing fans and new listeners alike, as it captures the authentic sound of a brilliant band at ease in their own skin, making great music that compels listeners to have fun and enjoy.

Much of the ‘Purple sound’ is due to the unmistakable vocals of Ian Gillan who brings a verve and majesty to the songs, worthy of his 55 years in the business and having turned 75 last week. ‘Whoosh!’ is testament to the fact that life experience counts.

In addition to 14 studio albums with Deep Purple, Ian also performed on 23 ‘live’ Deep Purple albums, plus 12 with  the band Gillan, seven solo albums, four with the Ian Gillan Band and one with Black Sabbath!

Online community radio station Lyme Bay Radio are delighted to announce that Ian Gillan will be doing a live interview with the station on Friday, September 4 between 4pm and 6pm, as part of the station’s ‘Finally Friday’ show with presenters Russ and Neil.

The show will be broadcast live at www.lymebayradio.com and Ian will be chatting about ‘Whoosh!’ and his career, choosing some music to play and answering questions.

Listeners will also be able to send in questions and messages for Ian via the Lyme Bay Radio Facebook page.

Meanwhile, here’s a fantastic chance to win a pair of tickets to any gig on the Deep Purple 2021 European Tour (excluding October 7 2021 at the O2 in London) or one of two runner up prizes of a copy of the new record ‘Woosh!’, signed by Ian.

For your chance to win one of these fantastic prizes just answer two simple questions:

To enter, email you answers to edit@lyme-online.co.uk or write them on a postcard and send to LymeOnline, Unit 5 Uplyme Business Park, Uplyme Road, Lyme Regis, Dorset DT7 3LS.

The closing date is 5pm on Monday, September 7 and winners will be announced on Lyme Bay Radio’s ‘Finally Friday’ show on September 11 and informed directly.

The winner will be chosen at random from all correct answers and the editor’s decision is final.

If you are interested in getting involved in Lyme Bay Radio and being part of the vibrant team, contact Chris Tipping, CEO of Lyme Regis Development Trust, which runs the station, at chris.tipping@lymebayradio.com or call 01297 445021.

WEST Dorset chamber choir Cantamus will give three concerts in the region this spring. […]