LYME Regis charity The Word Forest Organisation has received the backing of famous faces from across the globe, who have designed T-shirts to support its fight against climate change.

Environmentally-inspired designers and others who share a passion for the planet, including Oscar-winning actress Kate Winslet, have helped the charity launch a new range of ethical T-shirts.

The charity will plant a fast-growing tree in Kenya for every single T-shirt sold. Additionally, to mark the launch, the garment producers Teemill will plant a tree for every sale made from today until Monday, November 30, making it a double whammy for the world.

With a deep love and respect for the environment, the ‘celebri-tee-shirt’ contributors jumped at the chance to design something that reflects their feelings about the importance of trees and taking care of the planet.

The Word Forest is optimistic that their creativity will bring new eyes to their work and help the charity scale-up their operation to reforest Kenya, which has been deeply wounded by the coronavirus pandemic.

Since March, the charity has been sending £4,000 a month to Kenya to buy critical food aid for about 1,600 people in the tree-planting communities they work with, so they can keep starvation at bay. It’s a haemorrhage of their finances and they wish it were funding more tree planting.

The charity is hoping the ‘celebri-tee-shirt’ campaign will stem it and strengthen their ability to reforest Kenya and take care of the people tending the trees; they already live on the frontline of climate chaos and life was challenging enough pre-COVID.

According to ​a recent report from The World Economic Forum, 2020 is set to be the warmest year on record since reliable records began in the mid-1800s, which is even more remarkable since it’s not an El Niño extreme weather event year.

Additionally, the first nine months of the year saw record concentrations of major greenhouse gases in the atmosphere like CO2, methane and nitrous oxide and the extent of Arctic sea ice has also been at record low levels for much of the summer. Trees are the key to mitigating these issues.

The biggest star to support the T-shirt campaign is Oscar-winning actress Kate Winslet, who first learnt about the work of The Word Forest Organisation when filming scenes in Lyme Regis in March 2019 for upcoming movie ‘Ammonite’, based on the life of the town’s famous fossil hunter Mary Anning.

The actress has since narrated a documentary promoting the charity’s #TreesAreTheKey message. 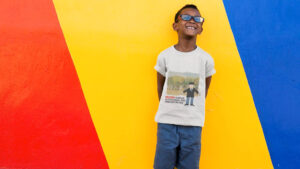 TV character Mr Benn has also backed the Lyme Regis-based charity having a local conntection of his own. Clive Juster, the BAFTA-winning editor of the children’s TV programme, lives in Lyme Regis and shares an office space with The Word Forest Organisation.

Star of Australian soap ‘Neighbours’, Stefan Dennis, who plays Paul Robinson, brings an inter-generational sparkle to the mix of tee-shirt designs, with one created by him and his daughter.

Stefan cites a poignant quote: “A very wise man once said, ‘When all the forests have been cut down, when all the oceans have been fished out and when all the rivers poisoned, only then will man realise he can’t eat money’. That is why the forests and coral reefs of the world must thrive.”

Met Office meteorologist and weather anchor on Channel 5 News, Clare Nasir, is a passionate advocate for the planet. Her beautiful design is centered around a geeky formula.

Clare comments: “We understand the science, we have done the maths and we know what we have to do. Trees have moderated our climate and nurtured our land for millennia. They offer the greatest chance at land-based climate mitigation for cleaner air, cleaner water, healthier soils and protection from flooding and desertification.” 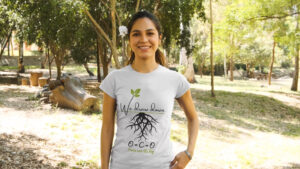 To ensure the trees reach maturity and are looked after in their early days, The Word Forest Organisation supports the people who plant and nurture them in a variety of holistic ways. They do their level best to ensure the forests are protected and sustained for the long term.

Trees in the tropics can grow up to 10 times faster than anywhere else on the planet, making them absolute beasts for drawing down and locking in CO2 and other pollutants.

Tracey West, CEO of The Word Forest Organisation, commented: “Our work is made possible by kindhearted people and corporate partners who believe in us and what we do. Despite the challenges we’ve been thrown with all of our fundraising events cancelled, our team continues to work tirelessly to get more trees in the ground. Trees are the key to solving far more of the world’s problems than simply mitigating climate chaos.

“Our trees tick the boxes for many of the Sustainable Development Goals including hunger and poverty. They provide fruit, nuts and medicines, they increase food and water security too and the spare commodities from the forest can provide an income.

“We can’t thank these amazing celebri-tee-shirt supporters enough for helping us at this critical time.”

View the ‘celebri-tee-shirt’ collection at www.wordforest.org/celebs from tomorrow, or find out more about The Word Forest Organisation and watch the #TreesAreTheKey documentary narrated by Kate Winslet at at WordForest.org

LYME Regis teenager Joshua Denning raised more than £4,000 for local good causes over the past year. […]

Five reasons to grow your own

WHAT better way can there be to stay healthy than eating a variety of the freshest fruit and vegetables? […]

Inspirational speakers to appear at second ‘Sea What’s There’ event

FOUR inspiration speakers are lined up to appear at the second ‘Sea What’s There’ event, to be held at the Marine Theatre in Lyme Regis on Wednesday, October 9. […]