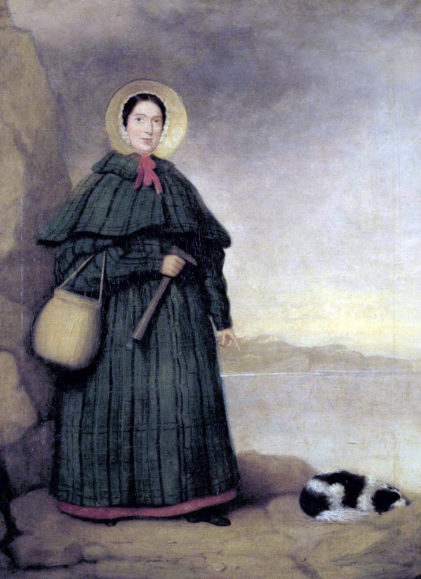 TO mark both British Science Week and International Women’s Day (Monday), we’re celebrating some of the female trailblazers in science.

And where better to start than Lyme Regis’ own fossil hunter Mary Anning?

Asked to depict a scientist, most children would draw a white man with ‘mad professor’ hair. But education resource experts PlanBee wants to show children that science and technology has always been the domain of brilliant, creative women as well.

They’ve put together a list of 10 women trailblazers in science, with Lyme Regis’ most famous daughter, Mary Anning, coming top of the list.

Mary Anning was a palaeontologist and a fossil collector. She was born in 1799 in Lyme Regis and collected fossils with her father and brother When he died, Mary sold her finds to keep her family afloat.

Anning’s most significant finds included a 5.2 meter-long skeleton of an ichthyosaur – the first to be found – and a plesiosaurus skeleton initially considered too good to be genuine.

Even though she found lots of fossils and was an expert in the subject, Anning was often not credited with her finds. Women were not allowed to be members of the Geological Society of London until 1904, 57 years after she died.

Anning is now starting to get the recognition she deserves – a statue of her is to be erected in Lyme Regis after a successful campaign by 13-year-old Evie Swire, and a film about the life of Anning, ‘Ammonite’, starring Kate Winslet, is due out next month, and the Royal Mint has just released a new 50p coin collection depicting Anning’s most famous discoveries.

The daughter of poet Lord Byron and Annabella Milbanke, Lovelace was born in 1815 in London. She became interested in Charles Babbage’s machines, which were designed to calculate mathematical tables mechanically, removing the errors that can appear when calculations are done by humans.

Marie Curie was a Polish-born physicist and chemist. She is well known for working with her husband Pierre as they discovered the radioactive elements Polonium and Radium.

It is believed she died from the effects of long-term radiation exposure.

One of Curie’s daughters, Irène Joliot-Curie, also won a joint Nobel Prize in Chemistry with her husband – for their discovery of artificial radioactivity.

Franklin was an English chemist whose work was essential to understand the complex structure of DNA (deoxyribonucleic acid), the molecule in the cells of all living things that contains the genetic code. The code can determine things like skin, hair and eye colour as well as other traits which we inherit from our parents.

Franklin took the first X-ray picture showing that the DNA molecule was shaped like a double helix. This photo was used by other scientists to discover the structure of DNA, without clearly naming her as a contributor.

The work that led to the discovery of the double-helix structure of DNA was awarded a Nobel Prize in 1962 – but the award went three men, and Franklin’s work went unacknowledged.

Australian astronomer John Broughton discovered an asteroid and named it ‘9241 Rosfraklin’ in tribute to Franklin.

Born in London, Dame Jane Goodall is considered the world’s foremost expert on chimpanzees and is best known for her life-long study of chimpanzees and their social interactions in Tanzania.

Through hours and hours of careful watching, sketching and note-taking, Goodall was one of the first to observe a chimpanzee using tools to fish termites from their mounds.

She was also one of the first to observe chimpanzees hunting for meat and gnawing on animal bones, debunking the theory that chimps were herbivores.

Instead of numbering the chimpanzees as was the custom at the time, Goodall named the chimps. David Greybeard was one of the first she named and others included Gigi, Mr McGregor, Goliath, Flo and Frodo, who eventually kicked Goodall out of the troop when he became the leader.

Mae C. Jemison – out of this world

Mae Carol Jemison became the first black woman to travel into space in 1992.

Born in the US, Jemison graduated from university with a degree in chemical engineering before earning her medical degree.

Jemison was part of the 1992 STS-47 mission during which she orbited the Earth 127 times! She was in space for almost 200 hours during which she conducted experiments on the effects of weightlessness on herself and the crew.

Jemison is a huge Star Trek fan. Whilst she was in space, she would often open communications by saying “Hailing frequencies open” which is a quote from the show. She even appeared on an episode of Star Trek in 1993.

Maggie Aderin-Pocock was born in north London in 1968. She is a space scientist and has a passion for sharing and educating both adults and children about space and other areas of science.

She co-presents ‘The Sky at Night’ as well as appearing on many children’s TV shows too.

Aderin-Pocock was diagnosed with dyslexia at age eight. She struggled at school but was passionate about science.

Somerville was a Scottish scientist who studied mathematics and astronomy. She was jointly admitted as the first female member of the Royal Astronomical Society.

Her work focused on the sun’s radiation effects on Earth’s substances and many have agreed that her later works and books lead to the discovery of the planet Neptune.

She was passionate about supporting women in education and fighting for their civil rights. At one point she was Ada Lovelace’s tutor and friend.

Sarah Gilbert is a British vaccinologist and professor of vaccinology at Oxford University. She specialises in the development of flu vaccines and has been working on new ways to create vaccines for over 10 years.

During the 2020 COVID19 pandemic, she co-developed a much-needed vaccine with the Oxford Vaccine Group.

Gilbert would often work from very early in the morning (4am) to late at night.

Elizabeth Garret Anderson was the first woman in Britain to qualify as a physician and a surgeon.

Born in London, Garret was initially taught by her mother, as there was no school nearby. When she was sent to boarding school at age 13, Garrett was upset by the lack of science and mathematics at her all-girl boarding school.

It is said that Garrett was inspired by an entry in the English Woman’s Journal which talked about the first female doctor in the US, Elisabeth Blackwell. This spurred Garret into meeting with Blackwell and opening up the path to medical careers for women

Through private study, Anderson obtained a certificate in anatomy and physiology. She finally obtained her licence to practise medicine in 1865.

Garrett was not allowed to work in a hospital, so in 1865 she opened her own practice in London.

Two years on from ‘Ammonite’ filming in Lyme Regis

DURING the past 12 months of virus mayhem, who would have spared a thought that two years ago we were all feeling so proud that our tiny town was to star in yet another Hollywood blockbuster movie. […]

Lyme is the destination of choice… even for Hollywood!

THANK you to all our readers who sent kind messages to celebrate LymeOnline’s first anniversary in February. […]