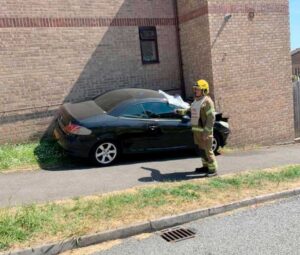 LYME Regis fire crew were called out yesterday (Tuesday) as a car crashed into the side of a house.

It is believed that the car rolled into the side of the property, on the corner of Henry’s Way and Queen’s Walk, which is actually owned by one of the fire crew.

The crew were called at 3.14pm and made the scene safe while they waited for a structural engineer to assess the damage.

No one was injured in the incident.

On Monday the fire crew were called to a fire in a field in Uplyme.

The cause of the fire is unknown but, due to current conditions, the public are asked not to have fires or barbecues in woodland areas or fields due to the high risk of them spreading.

The undergrowth is extremely dry and the smallest of fires could escalate very quickly. Dorset & Wilstshire Fire and Rescue Service are still sending pumps to Wareham Forest to extinguish hot spots weeks after the initial fire started on Monday, May 18.

POLICE are appealing for information after a headstone was stolen from Lyme Regis cemetery.  […]

LYME Regis’ very own superheroes recovered a Batman balloon during one of their more unusual emergency call-outs on Friday night.  […]

DEDICATED COVID-19 police patrols are now operating across Dorset in a bid to reassure communities and maintain public safety during the pandemic. […]