AFTER working for various Dorset micro-breweries, Emma Davies became an award-winning brewster known for her love of bold flavours and the use of interesting and foraged ingredients.

Driven by a love of fermentation and a desire to maintain a healthier lifestyle, in 2018 she turned her knowledge of brewing towards creating kombucha for her family.

She launched Curious Kombucha the following year and the Thorncombe-based business has gone from strength to strength, this year winning three gold Taste of the West Awards, as well as one of her drinks being declared champion cold non-alcoholic drink.

Kombucha originated in north east China about 2,000 years ago and has been consumed as a health drink in Asia, Russia and Eastern Europe ever since.

Organic green tea, spring water, white cane sugar and a symbiotic culture of bacteria and yeast are all that is necessary to create kombucha.

Secondary flavours can enhance the flavour profile of the drink and various fruits, spices and herbs are used.

As well as being low in sugar, vegan, gluten and alcohol free, kombucha is said to be good for your gut health.

She started making kombucha at home for her family and was then asked by friends at Lyme Regis Asian street food takeaway Red Panda if she could make some for them.

The drinks received great feedback from customers so Emma started looking for other local outlets. 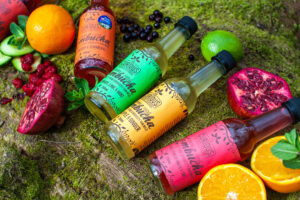 After three months, she had run out of space to brew at home so she approached Jon and Amanda at Gyle 59 and rented space at their Thorncombe-based brewery.

Curious Kombucha was launched at Exeter Vegan Market in January 2019 and by summer 2020 Emma had won her first  Taste of the West gold award for her Raspberry and Turmeric Kombucha.

She has gone on to wine three more golds this year for Blackcurrant and Ginger,  Pineapple and Ginger and Cucumber, Lime and Mint, with the cucumber flavour going on to be declared champion cold non-alcoholic drink.

You can find out more or buy Curious Kombucha products via the website www.curiouskombucha.co.uk

Drinks expert claims Lyme Regis bar is one of the best

A LYME Regis bar is toasting success after been named as one of the very best for beer by the UK’s top drinks expert. […]

Plans for fish and chip takeaway at Quality Corner