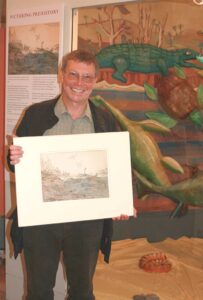 THE author of ‘Fossil Woman’ – the biography of Lyme Regis’ famous fossil hunter Mary Anning – will be signing copies of his book at Lyme Regis Museum next week.

Tom Sharpe will be at the museum between 2pm and 4pm on Thursday, June 24 signing copies of the hard-back book.

Tom is an eminent geologist and historian and is a long-time supporter of Lyme Regis Museum. He was previously curator of geology at the National Museum of Wales.

Lyme Regis Museum director David Tucker said: “It’s great to have Tom at the museum. His book has been really well received and we’re proud to be associated with it. Our honorary curator, Richard Bull, made a serious contribution to Tom’s research.

“We’ll have signed copies in the shop in the following days, if people are unable to visit us on June 24, but we expect them to sell fast!”

LYME Regis Museum is taking part in national initiative Museums at Night on Friday, May 18 for storytelling, arts and crafts and more. […]

CHARMOUTH-based author Jim Greenfield is donating 50 copies of his children’s book ‘Amadeus and the Sea Dragon’ free to local schools. […]

THE film ‘Ammonite’, partially filmed in Lyme Regis in March 2019, has been long-listed for nine BAFTA awards.  […]