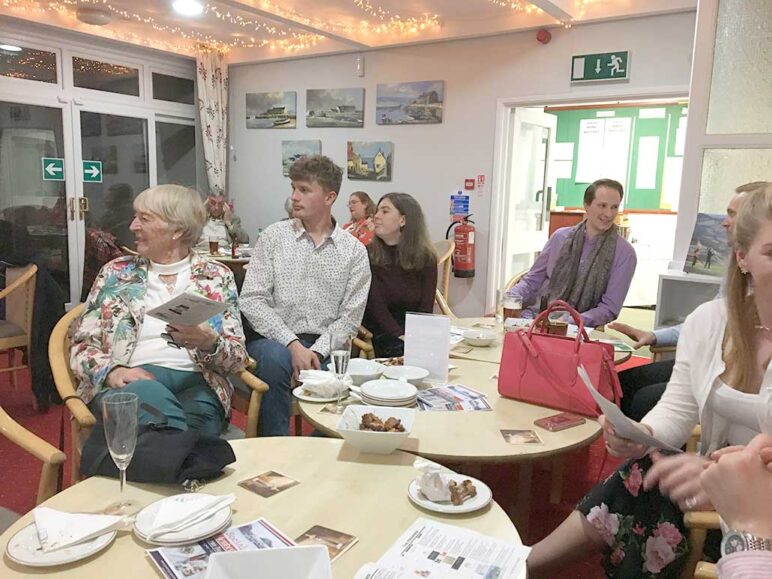 A CHARITY auction raised £3,812.21 to provide services and support for those in the Lyme Regis and Axminster areas affected by cancer.

More than 50 people attended the event, organised by Axminster and Lyme Regis Cancer Support. The auction was held at Lyme Regis Golf Club with local TV auctioneer, Graham Barton, taking guests through 45 lots, ranging from ice cream and cakes to an iPad and a week’s holiday in Scotland.

The auction also featured a special donation from the makers of ‘Ammonite’, the Mary Anning biopic which was filmed in Lyme Regis last month. Director Francis Lee promised a special prop from the film, signed by major stars involved in the production including Kate Winslet and Saoirse Ronan.

Mary Kahn, the charity’s founder and auction organiser, commented: “I am amazed at the generosity of those attending and those who very kindly promised services or made donations for us to sell to raise this money.

“A special thank you to Graham Barton he made the evening fun and humorous. Thank you also to Duncan Driver at the golf club.

“This is our largest single amount raised and allows us to continue to provide much needed services locally, to those affected by any cancer.  Thank you to everyone who made the evening such a success.”

Axminster and Lyme Regis Cancer Support was set up just six months ago to provide support and services to anyone affected by any cancer. It provides a weekly drop-in service, alternating between the two towns, provides additional services from registered therapists and hosts events such as the recent Blokes Brunch.

LYME Regis mum Annette Denning will be challenging herself to raise funds for children and adults with autism in a tribute to her son.  […]