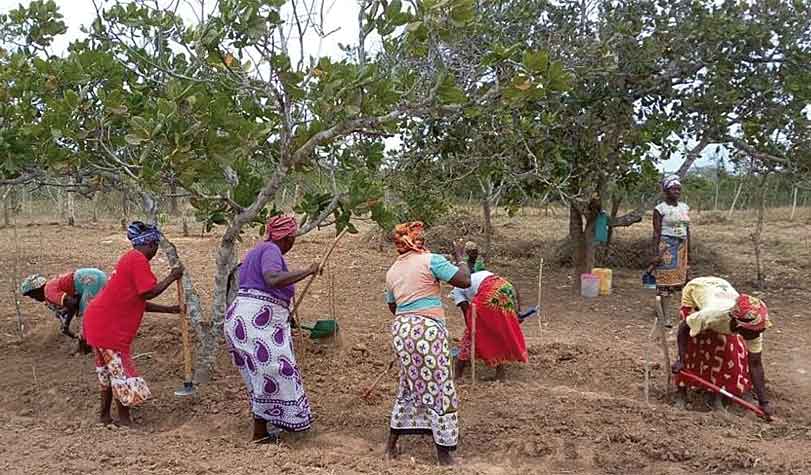 LYME Regis charity, The Word Forest Organisation, has announced that it is standing up to be counted alongside thousands of other small, international development charities across the UK, in their call for government support.

This comes following the announcement that, due to lack of financial support, nearly half (45%) of the UK’s small charities working with the world’s poorest people are expected to close due to the COVID-19 crisis.

Surveys from the Small International Development Charities Network show that 89% of these charities are on the frontline responding to COVID-19. The crisis has had a disproportionate effect on the sector, which is seeing a 27% increase in demand and a 33% loss in income.

The Word Forest Organisation typifies the position many international UK charities are in and they’re a case study for the Small But Mighty campaign.

The campaign is calling on the UK government to commit to a £50million package of support over two years, funded from the Overseas Development Assistance (ODA) budget. It will ensure the survival of these charities, including The Word Forest Organisation.

Small, international development charities support millions of people across the globe and employ tens of thousands of people in the UK.

The Word Forest Organisation has one member of staff, co-founder Tracey West, plus a solid handful of skilled volunteers. It was founded in 2017 and was set up to plant trees, build schools, facilitate education and support women’s empowerment in rural Kenya. Aside from the building, they do much the same in the UK but on a smaller scale.

The charity moved into St Michael’s Business Centre in Lyme Regis at the beginning of the year and was hoping they’d be scaling up their operation by increasing their reforestation activities, providing a raft of humanitarian support for the communities who tend the forest and doing more planting in the UK too, having last year planted almost 1,000 trees in and around Lyme Regis.

Instead, they’ve had to dramatically pivot to secure urgently-needed new income streams to stay open. If the charity closed, it would have an enormous impact in Kenya but also for its UK team and the planet, as the trees they plant in the tropics clean the air that blows all over the world. COVID-19 is a global crisis, which requires a global response.

Since lockdown was first announced back in March 2020, The Word Forest Organisation has sharply refocused and continues their shift to a 100% digital fundraising strategy. They had to seek out innovative ways to adapt to coronavirus and keep a lifeline extended to their communities to keep their operation going.

The Word Forest Organisation’s normal operations are mostly on hold and instead of sending money for tree planting and building projects, they’ve been sending vital food aid. This has helped more than 1,500 members of the tree-planting communities in Kenya, keeping starvation at bay.

Chairman of trustees, Simon West explains: “We’ve done a fair amount of planting throughout COVID, but it has been sporadic as our resilient beneficiaries are also struggling with curfews and lockdown too.

“Since March, we’ve been providing critical food aid to 1,600 members of tree planting communities, including very elderly, the disabled and many who are completely marginalised with no ability to earn money to survive.

“We simply cannot close. The existential threat of climate change hasn’t gone anywhere and we will continue to fight it for as long as we can.”

In the South West, the charity had planned for a summer filled with #TreeMendUs education events and workshops, with practical advice on how to take care of trees in our own neighbourhoods and also raising awareness of the global value of trees in the tropics too, showing how we can all be better environmentalists to take care of our world. All of the events were cancelled and countless thousands of pounds were lost.

Tracey West, CEO and co-founder of The Word Forest Organisation, said: “If we don’t continue to take care of the people who tend the forests, when we come out of this pandemic, we won’t have healthy communities able to plant trees.

“These amazing people are only ever a handful of meals away from starvation anyway and yet, they are some of the most important people on the planet right now.

“We must continue to mitigate climate chaos by supporting them – our team will continue to work flat out to ensure we survive too.”

For more information or to support The Word Forest Organisation, visit www.wordforest.org, or to find out more about the #SmallButMighty campaign visit smallbutmighty.co.uk

With travel being given the green light, are we facing an influx of guests?

YESTERDAY the second home owners of Lyme Regis hit back. In a sustained – and in cases venomous – attack on social media, they were warned with veiled threats not to venture into Lyme Regis with another Bank Holiday approaching and lockdown travelling relaxed. […]

Catch up with guest writer @Sophia_Moseley's busy life in her latest 'Working Lyme to 5' blog on the LymeOnline website #lymeonline #lymeregis #dorset https://t.co/Y5kn4I4G9Y
View on Twitter
0
2