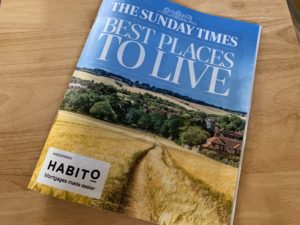 LYME Regis has been included in The Sunday Times‘ Best Places To Live, being placed in fifth place in the South West.

The newspaper also reveals that the average house cost in Lyme is £310,000, compared to the average of £255, 950 for the rest of the South West, making it one of the most expensive towns in which to live in the western peninsular.

This what the The Sunday Times had to say about Lyme Regis: “With pretty Georgian streets and its ancient harbour, this is as atmospheric a coastal town as you can hope to find. But it’s practical considerations, rather than romantic ones, that mean Lyme Regis is still our favourite base among the ammonites ad belemnites of the Jurassic Coast.

“It has reasonable connections (for this part of the world, at least): Axminster station is a 15-minute drive away, has hourly trains to Waterloo (3hr) and Exeter St David’s (40min). And a healthy high street, with an independent butcher, a bakery and a fishmonger, and a pair of excellent secondaries, Woodroffe School and Colyton Grammar, and this is the perfect setting for a family – or active downsizes – to put down roots.

“This seaside town is happy out of season, too. Indeed, Lyme is far more appealing after the holiday hordes have gone home at the end of August. (Cash in and get your house on Airbnb).

“This is when grown-ups of a certain age will find room to channel their inner Meryl and stand on the Cobb, gazing moodily at the horizon, before diving into the bay for an invigorating morning swim. Youngsters, meanwhile, meanwhile, can work off excess energy at the skate park , at the football club or with a quick after-school outing on a paddle board or kayak from one of the sandy beaches.

“The sailing club (family membership £175.50 a year) takes a break from Christmas to April but you won’t find space for a towel on Charmouth Beach on Christmas Day, when hundreds of swimmers put on Santa hats and dive into the watering aid of the RNLI.

“Drink in the view from the HIX Oyster & Fish House where £10.50 buys a Dorset Donkey cocktail, vodka, cherry brandy, lime juice and ginger ale – or over a vegan breakfast at SWIM (£10.50).

“The lovely art deco cinema, destroyed by fire in 2016, has not been rebuilt but the Marine Theatre shows occasional films as well as hosting comedy, plays and gigs: the folky singer Rozi Plain, who plays bass in This Is the Kit, is performing there this Friday.”

The article was obviously written before the current coronavirus crisis as the Marine Theatre, like the pubs, restaurants and cafes, are now all closed apart from serving takeaways and deliveries.

Lyme’s hospitality trade is hurting greatly but these words will give some hope that the town will return to its popularity – a town according to one of the best respected newspapers in the world is “one of the best places to live” in the South West.

For the full ‘Best Places to Live’ list from The Sunday Times, visit www.thetimes.co.uk/article/best-places-to-live-sunday-times-3qkwjnvrm

THE Jurassic Coast Trust is delighted to host an exciting art exhibition in Bridport this October, featuring local landscapes by artist Colin Bentley. […]

SOMERSET-based Butcombe Brewery makes its first foray into neighbouring Dorset with The Castle Inn in West Lulworth, which reopened in March after being transformed into a picture-perfect boutique escape. […]

LOCAL fossil collector Chris Moore has recently unveiled one of his most significant finds, thought to be the finest block of ammonites ever discovered along the Jurassic Coast. […]