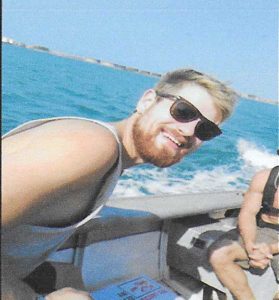 On January 2 they welcomed Sharon Evans to their workshop to see them put the finishing touches to a bench built to honour and celebrate the life of her son, Harry Evans (pictured left).

A Boat Building Academy graduate, Harry was killed last year by a sea snake bite while working on a fishing trawler off the Australian coast.

In a touching tribute, Harry’s friends held a fundraising night in his honour, raising £650, a sum matched by the landlord of the Bermuda Triangle pub in Poole, where Harry had worked. This was used to commission the bench, which now stands in the garden of the Bankes Arms at Studland, one of Harry’s favourite pubs.

Made from iroko – an African hardwood reputed to have supernatural properties – the bench is engraved by Will Reed, a boat building instructor at the academy, with the phrase ‘Enjoy the View. Cheers! Harry Evans.’

On a happier note, as the new year dawned, The Beautiful Boat Company learned that one of its craft has been nominated for the prestigious Classic Boat Awards 2019.

The Rascal, a 16 foot wooden speedboat based on sports cars of the 1930s, began life in the Boat Building Academy, where it was commissioned by Sam Smith while a student there.

The Rascal certainly turns heads wherever she goes, as local photographer Richard Austin found out when he joined her for a photoshoot in Lyme Bay.

The winners of the Classic Boat Awards are decided by public vote. If you would like to help honour the town’s boat building heritage, the teaching skills of the Boat Building Academy and the tenacity of four of its students in setting up in business, you can vote for the Rascal in the Traditional New Build category at awards.classicboat.co.uk.

While The Beautiful Boat Company has been up and running for less than a year, it has already launched its first commission, a punt for the Pear Pond at Hestercombe, a heritage garden near Taunton in Somerset.

The build was based on six photographs dating back to 1904 and, true to the company’s desire to use sustainable techniques and products wherever possible, included reclaimed teak from the Portman Ward at East Reach Hospital. Local and national media covered the story, including ITV filming the build in the workshop and the launch at Hestercombe.

The boatbuilders have also prepared a series of ‘pram’ dinghies that can be adapted for rowing, sailing or have a small engine fitted, and are light enough to be carried to the water’s edge by a couple of people.

While bespoke wooden boat building and repairs and renovations are their passion, the company fills gaps with non-marine joinery. That said, plans for the coming year look set to keep them busy, including the build of an ocean rowing boat, a classic sailing boat and the restoration of a highly-prized classic American powerboat in the pipeline.