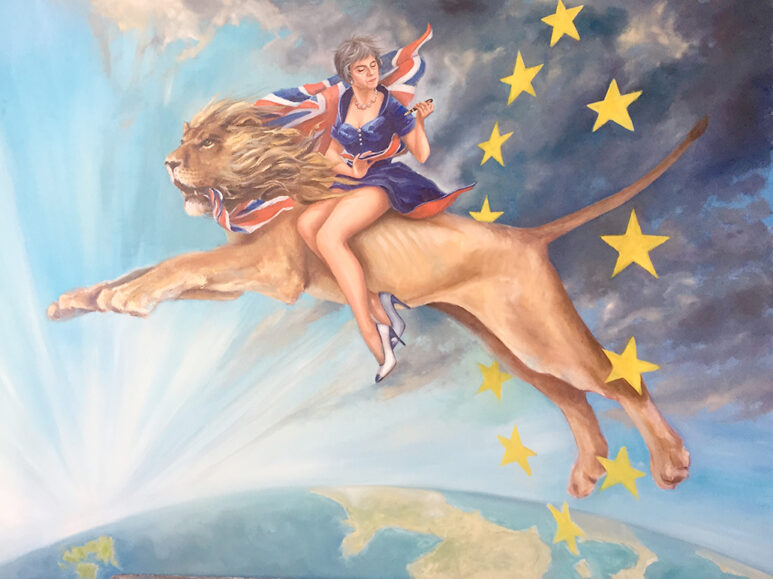 Based on a dream, the 5ft by 4ft painting shows Mrs May sitting side-sadle on a roaring lion, leaping through the EU stars as she contemplates the pen used to sign Article 50.

The painting has divided opinion on social media after being shared by the celebrity Reverend Richard Coles, who was mistakenly told it had been spotted in a charity shop.

The actual painting can be viewed at the Originals Gallery, Grand Parade in Poole, Dorset.

The image was also debated live on air on Talk Radio with Dan Wootton.

The painting focuses on the power of the Prime Minister’s pen, and is named after the line from Shakespeare’s Macbeth, ‘Is This a Dagger Which I See Before Me?’

Maxime has painted Theresa May in the style of a pin up girl, jumping through the European Union hoop of stars on the back of a lion, with dark clouds behind her and leaping towards the sunshine, with the globe beneath.

The painting also features a hidden heart in the clouds, which is Maxime’s motive that appears in all her paintings.

Said Maxime: “All my paintings normally start off as dreams, and I literally do wake up in the morning with an image in my head from a dream that I’ve had.

“When Brexit was happening, and when the actual paper was being signed, I just saw May on the back of a lion jumping from Europe back to England and when I woke up I thought to myself, gosh, I have to paint that!

“The pen is mightier than the sword and holds the power to do good and bad.”

About Francesca Evans 2659 Articles
Francesca grew up in Lyme Regis and has worked in community journalism in the area since 2011, having gained a First Class Honours degree in journalism and her NCTJ qualifications at Southampton Solent University.
Instagram Twitter

SEVEN talented local artists will be making a welcome return to the Town Mill in Lyme Regis. […]

CONTINUING to celebrate the holiday season, the two art galleries at the Town Mill in Lyme Regis are delighted to host a family duo for the first time and to welcome back Pop-Up Vintage for its eighth appearance. […]