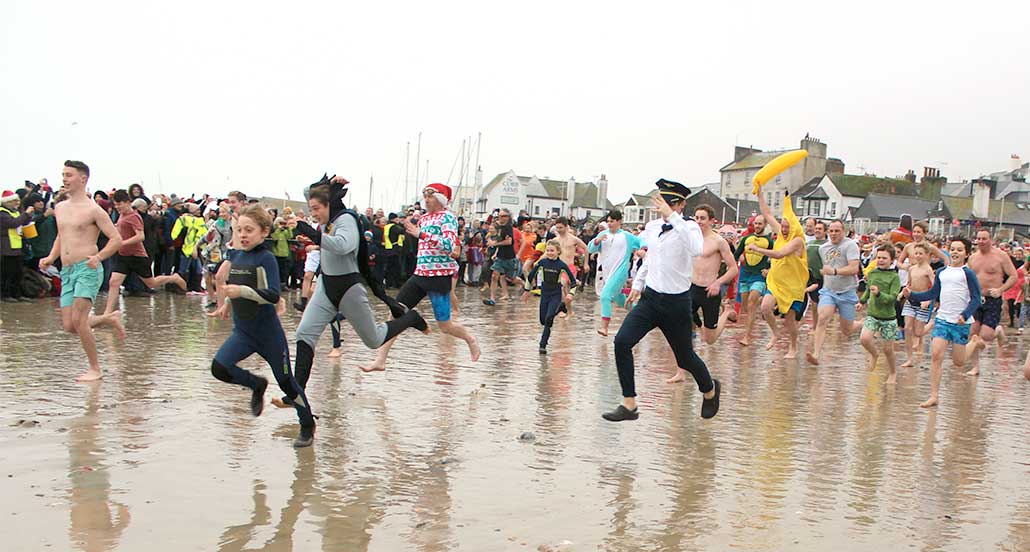 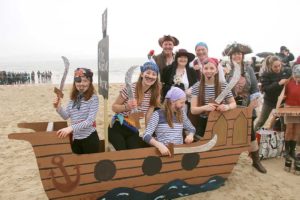 The annual Lyme Lunge, organised by the Rotary Club, followed with thousands of people lining the seafront to watch what is thought to be the biggest number of swimmers braving the icy sea in fancy dress (see video below). The event was also started by Councillor Larcombe.

It is thought that the Lyme Lunge is now one of the biggest swim events of its kind in the country.

A spokesman for the Rotary Club said: “It was the most swimmers we have seen, in excess of 500, and the biggest spectator crowd ever.

“We expect to be able to make a significant donation to the chemotherapy department at Dorset County Hospital. We’d like to thank all those brave souls who went in the sea, the many thousands who turned out to watch, members of the lifeboat who kept an eye on the swimmers and all our collectors.”

The New Year’s Day events rounded off a busy festive season in Lyme Regis. The town was packed for the switching on of the Christmas lights at the end of November, and the annual Carols Around the Tree service, another Rotary Club event, also attracted record crowds, underlining Lyme’s popularity as one of the most popular all-year-round resorts on the south coast.

Hundreds of spectators also watched as dozens took the plunge at the Charmouth Christmas Day swim, which raised almost £2,000 for the RNLI. This was said to be one of the most successful swims for several years.

Chairman of the Lyme Regis Lifeboat Supporters Group, Ken Lavery, said: “It was a great event with perfect sunshine, blue skies and the tide was right so we could use the sandy beach.

“It was just a perfect way to start Christmas Day and, once again, we are so grateful to everyone who donated to our life-saving charity.”

Community spirit was also shown in Lyme Regis on Christmas Day as The Galley Café in Broad Street opened its doors for a free lunch for all those seeking company and festive cheer. Lunch was served by Galley Café owner and chef Keian Gillet with several volunteers helping in the kitchen, and the event was attended by West Dorset’s newly-elected MP, Chris Loder.

For full video coverage of the Christmas and New Year period in Lyme Regis, visit the LymeOnline Sights & Sounds channel, or pick up a copy of our next printed issue on January 10.

THE Rotary Club of Lyme Regis will once again be supporting World Polio Day on October 24, having already contributed more than £2,000 towards the eradication of polio in recent years.  […]

AN evening of live music at the Marine Theatre in Lyme Regis is set to raise funds for new equipment for the venue. […]