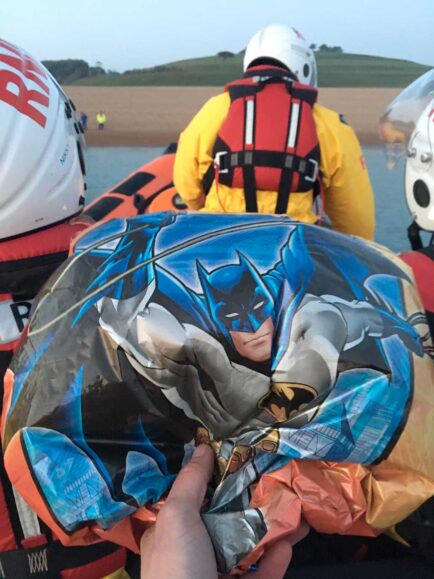 LYME Regis’ very own superheroes recovered a Batman balloon during one of their more unusual emergency call-outs on Friday night.

The volunteers from Lyme Regis lifeboat crew were called out at 6.30pm, after coastguards received a report on an object floating in the water off Abbotsbury.

Lifeboat helm Tim Edwards said: “Obviously from the shore it would not have been clear what this object was. It would have looked very strange, so it was something which had to be checked out by us and the coastguards.

“When we were close to the object it became clear it was a large helium type balloon with a Batman logo.

“We recovered the balloon from the sea to prevent pollution.”

The lifeboat returned to the harbour at 7.45pm. This was the fourth call answered by the Lyme Regis volunteers so far this year.

LYME Regis coastguards and the lifeboat crew were called to reports of an empty tender dinghy floating 400 metres south of the harbour on Tuesday night.  […]

Man arrested for arson after two fires in Lyme

A MAN has been arrested on suspicion or arson after two fires were started in Lyme Regis in the early hours of this morning (Monday).  […]